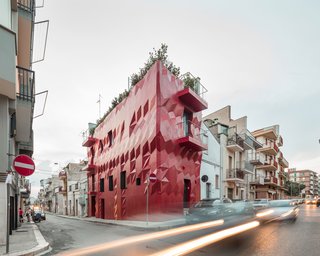 One of the most iconic refurbishment projects of 2016, gave GG-loop global media exposure, several awards and recognition as talented promise in the architecture world. The project is part of the ever-growing whole The Seed of Time.

The project was commissioned to GG-loop by the parents of the founding architect Giacomo Garziano. They gave him cart blanche and the challenge to refurbished their 4th generations' family house in Altamura, Puglia (IT), built by Cherubino Graziano, the great-grandfather of the architect.

The architect dedicated the project to his family and the interiors, which he built for himself, are currently opened to the public.

This refurbishment project is composed of two parts: an exterior one called Gentle Genius, an interior one called the Infection. These two parts correspond to two different movements: the observation, enabling protection from the outside, the action enabling the curing potential from inside. Together they form The Seed of Time, the union of conscious and unconscious, of the King and the Queen, of the Sun and the Moon.

The facade of the Gentle Genius appears flat in some parts, more calm, representing the quietness and the joy that the family has experienced and in others the surface is more chaotic, revealing the intensity of some specific dramatic moments. This sequence of extreme joy and deep sadness belongs to the King Crimson's album as well: red as feeling of rage, madness and passion, merges with blue as feelings of loneliness, quietness and sadness.

The exterior carries the story of the king and serves as a protective shield allowing a generative action to take place on the inside, to purify and heal the interior of the tower where he resides, to nullify the echoes in the void inner spaces. New life enters the wounds, to restore, to create a new positive condition and cure the King. The interior seeks to generate new life, to recreate a positive equilibrium in a long abandoned space.

The project The Seed Of time was opened October 2015, with an immersive performance by the art collective Elephants and Volcanoes. Visitors were guided through the sculptural space by 4 actors. A culinary intervention, a dance performance, light and sound installations, a video projection and costumes transported the visitor into a parallel reality where the past, present, and future are merged to alter perception and open new pathways of perspective. More info gg-loop.com/the...

Since then the house hosts artist residencies and cultural events supported by the airbnb’s rental.

GG-loop uploaded The Seed of Time through Add A Home.

The city and its various parts can be seen as a music score, the edifices acting as notes played by different instruments simultaneously. Gentle Genius is born in a disrupted part of the city, aiming to generate awareness of the critical current condition.

Historic centres usually have a clear, harmonious melody, but oftentimes the soundscapes of the outer layers of a city are disrupted, lacking a conductor able to integrate architectonic interventions throughout space and time.

Gentle Genius sets a new key in the urban music score, recovering a deep note lost in time, reinventing local instruments to manifest as a sound from the future, allowing the Genius Loci to compose new music again.

Hence it touches the instincts of the viewer, it is not linear, it is multifaceted perception that reaches out from the walls, transforming a residential building into a sculpture.

The red as feeling of rage, madness and passion, and blue as feeling of loneliness, quietness and sadness. The King and the Queen, the red and the blue merge within the surface.

The shiny finishing of the crimson red facade reflects the sky appearing blue as one approaches the building and looks at it from below.

Red has the longest wave length of the visible spectrum and can be associated with the longest sound-waves that rather than touching our ears are felt in the torso.

The spirit has found a place to emerge again, he shakes and touches those that are outside and protects and shelters those that have welcomed him.

When a body is sick, it changes equilibrium, any method applied to cure it is actually perceived by the body as causing an imbalance initially, as an infection itself.

Based on the Voronoi diagram, the furniture spreads its cells along the walls of the apartment embracing and purifying the entire space.

The project starts from the point of architecture, but through the participatory performance it provides different ways of seeing, extending ideas of other concepts; of ways of being, of ways of living, of ways of thinking.

A generative pattern made out of cells grows along the wall as a new plant, embracing the space. This system contains all the functions of the house.

Architect Giacomo Garziano:"I believe that architecture, as answer to a spatial demand, cannot be merely functional. Every space needs to tell a story."