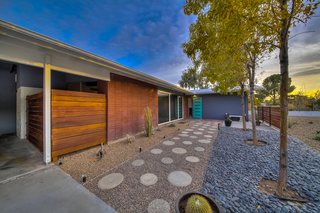 Completely remodeled mid-century modern home in Las Vegas, NV. Many original features remain including the mahogany paneling, screen block, and several light fixtures. Stained concrete, tile, and bamboo flooring were added and the landscape was completely redone. Dramatic floor to ceiling windows are in several rooms in the home allowing natural light in and providing a great view of the step-down pool. An ipe privacy wall and garden area were also added to this home originally built in 1961. This home still has the original house plans and many original elements remain.

uploaded The Ross Residence through Add A Home.
Add your own project for the chance to be featured in Editor’s Picks.