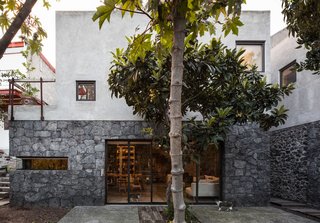 “La Pancha” is the name by which this very sloped piece of land in the south of Mexico City is known. Belonging to the family for more than 100 years, the land forms part of the imaginary and identity of the owners of this small house.

The project, since its inception, has been a dialogue between the home’s future inhabitants and its architects as to how to recognize and preserve the conceptualization of place - an idea which had been imagined and lived for so long.
The land informed the majority of the design decisions; defining the placement of the house, the terrain was sculpted to create a series of relational spaces, such as terraces, courtyards and lookouts. The layout of the construction of the ground and first floor respond to two distinct but complimentary logics; below, the construction cuts in and aligns with the terrain, above, it slides out from the base, creating spaces to allow for looking out and being seen from below. The site defined the spatial organization and the interior distribution; the proximity, the access points, the stairs, the double height of the living room and the patio with the big tree.

The raw materiality of the house is the result of the same negotiation; the resources available dictated that the project be managed almost in the style of DIY construction, of handcrafted architecture, using and reusing stones, earth and trees taken from that very place so lived and imagined.

uploaded La Pancha House". Handcrafted Architecture in the South of Mexico City. through Add A Home.
Add your own project for the chance to be featured in Editor’s Picks.