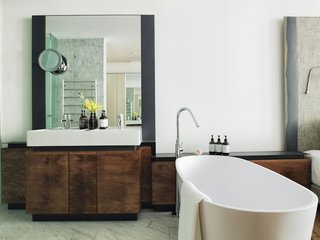 We’ve been fans of the Singaporean hotelier Loh Lik Peng since the beginning. And we’ve also followed with great interest the continuing evolution of the Sydney hospitality scene. So when it comes to the Old Clare Hotel, we’re doubly hooked. Not only because Chippendale, just to the south of the central business district, could do with a stylish boutique hotel as a part of its continuing transformation, but because Peng, who’s made a career out of turning derelict historical properties into buzzing, contemporary boutique hotels, is just the man to do it.

He had help, of course. Sydney architects Tonkin Zulaikha Greer are well known in Australia, and for good reason, as they’ve got a knack for putting existing, often industrial, spaces to new use. And you could do worse, for a canvas to work on, than the Art Deco Clare Hotel, which has been joined together with the Victorian-era Carlton United Breweries headquarters by enclosing the alleyway that ran between the two. The result is roughly one part lovingly preserved historical patina and one part ultra-modern, ultra-tasteful luxury, an impressive achievement and one that puts the Old Clare at the top of a lot of design junkies’ must-try lists.

They won’t be disappointed. Not only because Peng’s hotels have a history of delivering on their design promise with substantial comforts and a vibrant social life, but because of the work of a few talented local chefs as well. Sydney is undergoing something of a foodie explosion at the moment, and its two restaurants are headed by a superhero pair: Clayton Wells, a Momofuku alum, and Jason Atherton, a Michelin star winner who’s apparently in global-domination mode. It’ll put Chippendale on the map for future visitors to Sydney, and that’s more than you can expect most boutique hotels to do.