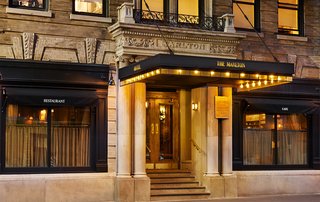 In the boutique-hotel world, what’s old is new again. In New York Sean MacPherson’s hotels were among the first to turn away from glossy, futuristic minimalism and towards something with a bit more retro romance. So the historically inspired Marlton, the century-old Greenwich Village hotel which once hosted the likes of Jack Kerouac and Julie Andrews, is perfectly in character.

It’s also perfectly full of character. In this town there are always bigger, swankier, more luxurious hotels. Personality is the only way out of that arms race. The Marlton is swanky enough, in its Parisian-inspired way, and it’s also realistically priced, so as to make space for a more eclectic clientele. It’s been described as a sort of baby Bowery, and that’s not inaccurate — imagine the Bowery Hotel on a cozier scale with a slightly more residential vibe, and you’re most of the way there.

Margaux, the restaurant, has hit on something of a foodie trifecta, serving market-driven French, Mediterranean and California-style dishes in a richly atmospheric set of dining rooms — all warm light, dark woods and plush leather banquettes. (They’re especially strong on veggies, with plenty of vegetarian, vegan and gluten-free options.) The bar, meanwhile, is a classic, clubby space prizing warmth and character above all else — which, of course, is rather the Marlton’s whole point.