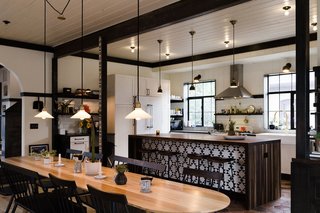 They've come a long way since the garage. Marke and Kim Johnson started their design business The Made Shop in their back yard with a love for hands-on, material-driven projects. In time, they've accrued design work from the likes of Adobe, Pee Wee Herman, Hit Record, The Fray, and independent films like Looper. Three daughters, a couple employees, and many years later, they've outgrown the garage and hired Kim's brother to build their home and business at the crest of one of Denver's most bustling streets in the Highlands. Marke has an architecture degree from Harvard but took the graphic design path and is unlicensed, so he wouldn't feel equipped drafting for a client but certainly had fun designing his dream home and office, knowing just enough "To be dangerous." Kim pulled equal shifts, hand-glazing tiles for their custom shower and securing details like their three-story stairwell light fixture. A creative couple whose ideas spill over into all that they do, they've built a refined personal nod to their garage days. The home is Shaker influenced with a modern expression. The budget goal was to use pared down materials in interesting ways, and the result is a home, office, and AirBNB suite that sings with DIY energy and family dynamism.

uploaded The Made Shop through Add A Home.
Add your own project for the chance to be featured in Editor’s Picks.