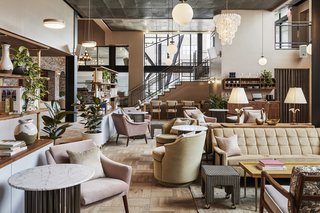 The British boutique hotel company, which opened its first location in Shoreditch, London, in 2006, has launched its first North American outpost in the Williamsburg neighborhood of Brooklyn, New York.

The Hoxton, Williamsburg just opened a few months ago—but it looks and feels like it’s been there much longer than that.

The new 175-room hotel occupies the site where the 1924 Rosenwach factory once stood, and it offers views of Manhattan and the East River. (The factory, which burned down in 2009, made the iconic wood water towers that dot the New York skyline.)

The light-filled lobby, located in the basement, is at once industrial and warm.

The Hoxton, Williamsburg stands on the site of the former Rosenwach factory, which produced wood water towers scattered throughout the New York landscape.

Expansive views of the Manhattan skyline are available from many of the rooms and from Summerly, the rooftop bar and restaurant.

Locally sourced ceramics and artwork and book collections curated by Williamsburg residents make the rooms feel more like a Brooklyn home than a hotel.

Summerly, which overlooks the Williamsburg neighborhood, is a favored hangout for hotel guests and locals alike.

Backyard, the hotel's casual outdoor restaurant, is framed with blackened steel and brick structural elements that reference the neighborhood's industrial past.