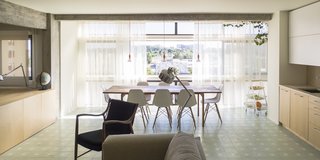 José Henriques and Carla Moreira were happy in Telheiras, their little corner of Lisbon, with its plentiful gardens and shops, good schools, and easy access to the metro and freeway. So when it came time to find a slightly larger house to raise their two children, they didn’t look very far.

A 1980s apartment building with a checkered black-and-white facade caught their eye, and upon entering, they found a unit for sale that had sprawling views toward the south, but an interior that was dark and subdivided. The couple’s original plan—to replace the plaster, vinyl flooring, and ceramic tile finishes—was thrown out when their prospective architect, Miguel Marcelino, convinced them that they needed to tear down walls to bring natural light deeper into the space.

Marcelino, whom they had met through mutual acquaintances, informed them that his first order of business would be to unite the closed balcony, hallway, kitchen, living room, and a small adjacent bedroom, and leave the concrete columns and beams bare. "I wanted to create a sort of ruin, as if it was found this way and then occupied," the architect explains. José and Carla signed on to Marcelino’s vision, and a full-bore renovation commenced in late 2015.

The maze of ceramic brick walls partitioning the main area was removed and replaced with sliding panels, a built-in desk between the living room and office, and a wardrobe in the hallway, all made of birch plywood. Patterned light-green cement tiles, made by local studio Projecto Mosaico, now pave the floors. Although the absence of a balcony deprives the residents of outdoor space, Marcelino endeavored to create an indoor-garden atmosphere, which will be more fully realized once the vine crawling on the beam above the dining table matures.

As the project evolved, so did the architect’s responsibilities. Marcelino ended up selecting everything from the furniture to the light fixtures. Close involvement was key to maximizing space in the 1,240-square-foot apartment. In the bedrooms, for instance, custom trundle beds can be hidden to provide extra room for study and play.

For Marcelino, who began his career working on large-scale projects like a museum and a school, seeing to minute details like the translucency of the drapes was an adjustment. But the architect found ways to make the residence feel more grandiose. Mirrored incandescent light bulbs mounted on the walls illuminate the apartment in dramatic fashion. "It’s a museum-like atmosphere," José notes.

The entire design-build process lasted about a year. "We didn’t mind the extra time it took—the most important thing was for everything to be well done," says Marcelino. Visiting the apartment a few weeks after completion, with a dozen boxes still left to unpack, the architect and residents express mutual admiration. During construction, José, who is in finance but trained as a civil engineer, would frequently visit the site before work to be sure the project was going smoothly. As Marcelino says, "I was lucky my client turned out to be the best building inspector."

The bed, bedside tables, and console are all designed by Miguel Marcelino. The Glo-Ball bedside lamps are by Jasper Morrison and the Tolomeo wall lamp is by Michele De Lucchi.
-
Lisbon, Portugal
Dwell Magazine : July / August 2017

A Nockeby sofa by Ikea, a 45 Chair by Finn Juhl, and an Egg Gold coffee table by Kare are featured in the living room space.
-
Lisbon, Portugal
Dwell Magazine : July / August 2017