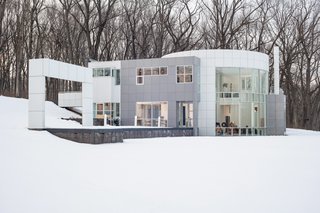 In the late 80s, Lou and Sandy Grotta commissioned architect Richard Meier to create a home in New Jersey that would showcase their collection of contemporary studio jewelry and significant works in wood, ceramic and fiber. The Grotta Home features their art within its architectural frame, with nature as an ever-present backdrop.

Sited near the top of a seven-acre sloped clearing framed by forest, this house features public spaces with spectacular views to the landscape while the more private rooms look to the insular woods at rear. Two perpendicular axes extend from the center of the house to distant locations, thereby extending the interior volumes into the landscape and according the house a locus within an otherwise ill-defined site.

Artist’s work is not confined to the walls in the Grotta home. Rather, jewelry is displayed on the walls, table settings feature artisan- made plates, silverware and dishware, and artwork is moved regularly to create a new experience –“ just another means of engaging in constant conversation,” writes Glenn Adamson, curator and author from the Yale Center for British Art. The Grotta home, is a “vessel for living,” in Adamson’s view, where one encounters vases, bowls, baskets, chairs, textiles and teapots, but also powerful sculptural forms, rich with an array of nature-derived or nature-inspired textures, colors and shapes.

Furniture by designers such as Edgar and Joyce Anderson feature equally alongside Scandinavian design classics by Kay Bojesen or textile works by Sheila Hicks, Françoise Grossen or Jack Lenor Larsen.

Ceramics by Toshiko Takaezu, Wayne Higby and Bodil Manz, along with the creations of significant jewelry artists such as Wendy Ramshaw, Otto Künzli or Tone Vigeland, complete the picture of this extraordinary collection.

The works are carefully framed within Meier’s open architecture, an equal blend of glass and solid surface. Nature, visible from many vantage points, plays an essential supporting role. The art that the Grottas had acquired influenced Meier’s design and his architecture, in turn, has influenced the way in which the collection has continued to evolve. With its numerous, sometimes surprising insights and vistas, the architecture produces a fluent link between interior and exterior space.

The Grotta Home is extensively documented in a new book "The Grotta Home by Richard Meier: A Marriage of Architecture and Craft," a lushly photographed, coffee table-sized book about the interplay of nature, art and architecture designed and photographed by Tom Grotta, co-curator of browngrotta arts, and published by arnoldsche.

The book provides an intimate view of how the Grottas experience the work day to day. The collection and its natural setting inform every aspect of their lives. Artists and essayists including Sheila Hicks, Jack Lenor Larsen and John McQueen and Joseph Giovannini provide additional insights in the accompanying essays. The texts and personal statements by artists make it clear that the Grottas not only collect art and design but also experience them as an integral part of their living environment. The Grotta Home will inspire others who wish to do the same.

uploaded The Grotta House through Add A Home.
Add your own project for the chance to be featured in Editor’s Picks.

The Grotta Home by Richard Meier: A Marriage of Architecture and Craft, photography and design by Tom Grotta, published by arnoldsche