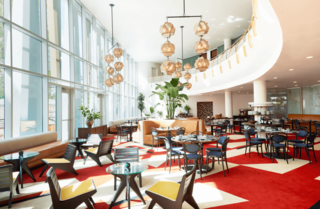 At this late date, most American cities of any appreciable size have at least one high-style, high-design boutique hotel. But not many of them begin with raw material of the Durham Hotel’s caliber. The mid-century modern Home Savings Bank building is something straight out of the Mad Men era, and Commune Design — whose work you know from some of the Ace hotels, among others — didn’t shy away from the inspiration.

The Durham Hotel is more than just an eye-popping color scheme. (Though it certainly is that.) It’s also an homage to local arts and crafts, from records by indie mega-label Merge to the Cone Mills denim in the staffers’ uniforms to the one-of-a-kind Raleigh Denim quilt on your bed. Unsurprisingly, you’ll find the same philosophy at work in the restaurants’ menus, where James Beard award winner Andrea Reusing draws on a long list of North Carolina producers and presents a solid case for the region’s culinary heritage.

All this is much more than just good branding. For first-time visitors, a night or two in a hotel is more or less the only chance for a new city to make an impression — and it’s hard to imagine coming away from the Durham feeling anything other than impressed.

Text Courtesy of The Durham Hotel