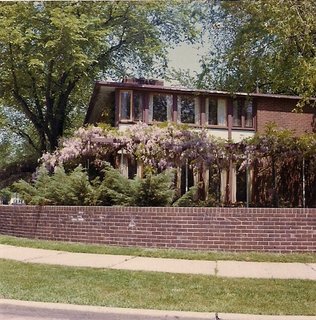 Mrs. Clark T. Wells expressed her wishes for a home for her husband and family in a letter to Alden B. Dow on December 3, 1939. “We have decided to abandon the idea of a one-story house. We feel that perhaps we can get more for our money and an extra room or two with two stories on at least part of the house.” A colored pencil presentation drawing dated January 10, 1940 shows a two-story house, as desired

The Wells residence is situated on a corner lot in the gentle bend of the road. A brick retaining wall follows the curve of the street giving the 2480 square foot structure a raised appearance. The exterior is of the same brick as the wall, with Homasote panels under bands of windows on both levels. The façade is divided by a deep wood trellis that wraps around two sides of the house. The flat metal roof projects out beyond the walls and windows.

At the front door is a random arrangement of glass blocks set into the brick wall. The layout of the rooms follows the basically square footprint of the house. One steps into the living room from a brick entry foyer. The living room looks out onto the street with a linoleum-topped seat under the windows. Wood shelves line the adjacent plaster wall. The dining room features a wall of windows set above edge grain fir cabinets; drawings show a screened porch off the dining room.

The upper level contains four large bedrooms, the master bedroom being a combination bedroom and upstairs sitting room or study. In a letter accompanying the sketches Mr. Dow referred to a basement with a game room and fireplace that would be accessible from the main entry hall and from the garage.

The construction contract was signed in December 1940 for $16,097, and the house was substantially completed by the summer of 1941.

uploaded The Clark T. Wells Residence by Alden B. Dow through Add A Home.
Add your own project for the chance to be featured in Editor’s Picks.