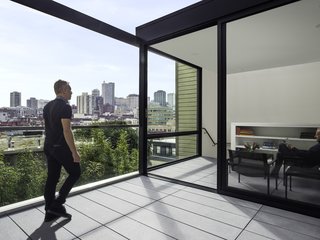 The Owners bought the house as their return to the City after living in the suburbs to raise a family. Set on a gritty Alley on the south slope of Telegraph hill, the 835-square foot house was clearly too small for them and their occasional guests. In addition, the layout of the Victoria era house (with a restored façade after a fire in the 1940’s) was not conducive to the open plan living they desired. At one time the house enjoyed a good amount of light and air, but over the years it had become engulfed by taller and denser buildings. The challenge was not only to gain light but also to capture the views blocked by the neighboring buildings.

At the rear of Lower Level, and partially sunken to gain ceiling height, the Master Bedroom Suite is located for privacy and quiet. To expand the depth of the Lower Level, the adjacent Courtyard is treated like a room, with walls, but no ceiling. The dark stained wood boards of the rear façade turn and extend along the side and rear property lines.

At the Upper Level, the Living spaces have been relocated to the rear of the house to capture light and partial views through a new wall of glass. Connecting the levels is a new stairway. This vertical spine (periscope) projects up onto the roof to access a new Sunroom-Roof Deck. These rooftop spaces fully capture the spectacular views while blurring the line between interior and exterior space.

Samaha+Hart Architecture uploaded Telegraph Hill Periscope through Add A Home.
Add your own project for the chance to be featured in Editor’s Picks.

View of the San Francisco skyline from the Roof Deck and Sun Room. The same colored concrete pavers are used in both spaces to blur the relationship between the indoors and outdoors. The owners selected the 1966 collection of outdoor furniture by Knoll which contributes to this effect.

View of the San Francisco skyline from the Sun Room. The bookcase also acts as a guardrail for the stairway.

Rear Yard view of the addition and remodel showing the large expanse of windows at the Living-Dining Room Level and the Sunken Courtyard at the Master Bedroom.

The historic front facade (Alley view) of the house which was preserved and restored. The Sun Room addition at the rear is not visible from the Alley.

View of the Dining Room from the Kitchen. The Stairway, leading up to the Sun Room and down to the Master Bedroom Level (beyond), wraps around the Fireplace Wall.

View of the Living-Dining Room with expanse of windows and bamboo hedge beyond for privacy.

View of the Living Room with the "blind" door at the Bar shown open.

View of the Dining Room with the Fireplace Wall and Stairway.

View of the Kitchen from the Dining Room.

View of the Kitchen with custom cabinetry, stone counter-tops, back-splash and cantilevered stone shelf. The appliances are all by Miele, including induction cook-top set flush with the counter, slide out exhaust hood, integrated refrigerator and wall ovens.

View of the rear yard and bamboo hedge beyond from the Entry Foyer.

View of the Powder Room, which also doubles as the Guest Bathroom. The same stone as used in the Kitchen is used the Bathrooms for continuity. The wall hung lavatory is by Duravit, the medicine cabinet with integral lighting is by Sidler and all fixtures are by Vola.

Soaking tub by Wet Style and custom stone niche at the Master Bathroom.

Custom vanity with solid surface counter-top and fascia at the Master Bathroom. The recessed medicine cabinet with integral lighting is by Sidler.

View of the Sun Room and Roof Deck from the neighboring rooftop.

View of the project in context.

View of the project and Telegraph Hill, with Coit Tower and Alcatraz Island beyond.