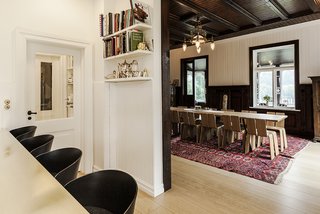 With its idyllic vistas and abundant greenways, a lakeside hamlet just a half-hour drive north of Copenhagen seems farther from the heart of the city than it is. Which is precisely why, one weekend three years ago, Jens Martin Skibsted, a founder of Danish brands KiBiSi and Biomega, and his wife, Naomi, a fashion entrepreneur from Zimbabwe, decided to purchase a waterfront retreat there.

Originally completed in 1897, the home was built by an anonymous Norwegian carpenter who introduced a taste for wood-frame houses with black siding in a region where neoclassical white-brick mansions with glazed black terra-cotta tile roofs had defined the local vernacular for years. A nod to the builder’s heritage, the finials on the gabled roofs proudly echo the bows of wood Viking ships.

Upon seeing the property, the couple took to the building’s charming historical details, picturesque top-floor balconies, and varying window shapes, all of which presented a dialogue about the passage of time. Naomi envisioned raising the couple’s preschool son there, and Jens saw the potential to accommodate his own personal collection of “toys,” which includes many bicycles and a classic 1977 Oldsmobile that belonged to his adventurous, centenarian grandmother, who hunted exotic wildlife when such things were fashionable. With direct access to a lake for swimming and boating, the house also promised an outdoor lifestyle that would allow Jens to be “fast out into nature,” as he puts it.

Other reasons had made moving out of their Copenhagen apartment, designed by the renowned Berlin-based architect Jürgen Mayer H.— necessary for the Skibsteds. Their home had become too small for the family, which at the time included three children and has since grown to include a fourth.

Acquiring the property, Jens and Naomi embraced the old-fashioned details of their new two-story suburban house. While others like it had been torn down or radically changed in recent decades, this one survived, perhaps because, as Jens explains, a merchant had transformed it into a more livable space in 1929 by adding heating radiators, a garage, and a winter dining room.

The most recent owner, a nonagenarian physics professor, had barely altered the structure, with the exception of adding ceramic wood-burning Swedish-style heaters. Those 1950s appliances, which took one craftsman an entire summer to make, “were very spare and modern in the context of this house,” says Jens, who turned to Mayer to imbue the home with a similar modernity without ironing out its vintage essence.

Posts carved with typical geometric Norwegian motifs, a curved stairway in the foyer, and dark wood–paneled spaces on the ground floor were all distinguishing features that Mayer and the Skibsteds decided to save. The dated kitchen, three bathrooms, and the antiquated heating system, however, needed enhancements. The couple also added three bedrooms in the cellar, a large but cramped space with high floors.

Mayer liked that approach. “When you look at our projects, there is always a dialogue with history,” he says. “Echoes of the past form a historical reference. The undulating roof of a cathedral or the domes of a church are elements that anchor their structures in history. We take such elements and exaggerate them.”

The renovation, with the help of local firm MLRP and project architect Marcus Blum, from Mayer’s firm, J. Mayer H. and Partners, encountered some setbacks. The team found dead rats under the kitchen floor, half the roof was rotten, and the staircase to the basement was undersized. “In theory, I could have thrashed the inside to insert a modern space,” says Jens, “but I decided not to because the old details are too beautiful. Those are things you cannot get anymore.”

Instead, they brightened dark areas of the interiors as much as possible. While dark wood ceilings and surfaces remain whole, the wall panels that stand at eye level, above wainscoting height, now have a new layer of bright white vertical slats. Velux Sun Tunnel skylights were added to open up the darkest corners of the house. The team also worked around the existing interior layout, which included several “dead-end corridors,” Jens notes. “We would not do that today, but we kept some of them because that was the spirit of the house.” Slightly rearranged, the top floor now incorporates hallway space going into the enlarged master suite. On the first floor, a pantry was folded into another space to bring in more light.

The team also gutted the systems, adding water and gas pipes, electrical wiring, insulation, and radiant heating beneath new wide-plank oak floors. New breathable wood-wool insulation allows the building to avoid fungal growth and rot. The renovations also reduced fire risk. “Before, the house had electrical wires that were cloth-wrapped and housed in wood boxes,” says Jens. “It was kind of a death trap.”

Outside, vertically cantilevered powder-coated steel railings loop around a new back deck outfitted with a hot tub. The additions were adapted from Mayer’s idea of landscaping as a palimpsest. Here, the notion is interpreted as a patchwork of varying materials: rubber surfaces for playing on, lush grass lawns, pale gray plastic grating, and asphalt tiles.

While Mayer and the team salvaged the majority of the home, they also added contemporary details rooted firmly in the present—most notably to the exterior of the building, which now features a collage of staggered box windows. “The house had been added on to, and it was like a catalog of window styles through the years,” says the architect. “We simply added new window shapes to that catalog based on the existing ones.”

At once bold and subtle, the new windows protrude from the facade, contrasting with the black siding. Uniting past and present, the new fenestrations speak the language of the old in a contemporary manner. But when the Skibsteds look at the house from their boat dock below, little seems different. “We have a modern house,” says Jens. “But with this design, we saved a piece of history.”

Jens Martin Skibsted salvaged an 1890s house just outside of Copenhagen, reworking it with architect Jürgen Mayer H. The structure is a retreat for Jens, his wife, Naomi, and their children. The dining table was designed by him to accommodate 18; the legs were produced by HAY, as were the Shanghay molded plywood chairs. “The house has so many things,” explains Jens. “Every corner has a story.”

The living room on the ground level features facing Brick sofas by KiBiSi, a design firm Jens cofounded along with Bjarke Ingels and Lars Holme Larsen in 2009; the cushions, covered in Kvadrat fabric, are tied together and studded with a molded fiber-concrete button. An Arco lamp by Achille and Pier Giacomo Castiglioni for Flos extends over an On the Rocks sofa by Francesco Binfaré for Edra.

The design team lowered the cellar floor by a foot and extended a rear-facade addition toward the lake. “I am all for an architecture for its time—this house had a strong personality,” Jens says. “The overscale windows create a tension, a dialogue . . . it’s a new element, but one that celebrates the original idea.”

The footed bathtub in the completely renovated bathroom is by Marc Newson for Caroma.

Another view of the dining room reveals the original woodwork and character of the 19th-century structure.

In the renovated kitchen, a Lacanche range is surrounded by built-in storage. A state-of-the-art wall-mounted ES2 Strietman brass-and-copper espresso maker by Dutch designer Wouter Strietman adds a jewelry-like touch to the cook space.