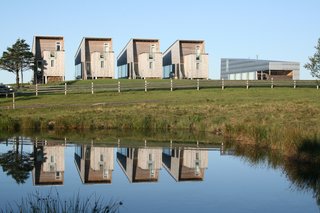 On the southern shore of Nova Scotia, near the port town of Lunenburg, architect Brian MacKay-Lyons and his wife Marilyn happened on the ruins of an abandoned fishing village.

French, German, and Swiss settlers had occupied the land in waves, leaving only dilapidated homes, and the surrounding forest had begun to reclaim the farmland. Undeterred, Brian, a partner at MacKay-Lyons Sweetapple Architects, set out to clear and cultivate the site.

That was in 1988. Twenty years later, Shobac opened as an "agricultural village" with cattle, horses, and sheep roaming its pastures and drumlins, or hills created by passing glaciers. Visitors can rent any of the four cabins, the studio, the schoolhouse, the barn, Point House, or Enough House. Some buildings date back to the 1800s, and others are modern designs by Brian and Ghost Residency interns, creating a campus that evolves with time while keeping its historic roots alive.

Modeled after fishing huts, the cottages Hirtles, Gaff, LaHave, and Mosher provide two twin beds on the main floor and an open upstairs loft. Each building has a bathroom and shower as well as a fully equipped kitchen.

Natural cedar lines the interior of Hirtles, which was upgraded to include a second bathroom and a jacuzzi tub that looks out onto the white sands of Hirtles Beach.

Situated on a cliff, the studio blocks the northern wind that blows over the sea.

A 40-foot table can be a shared workspace or provide banquet seating. The studio also contains a loft, two bathrooms, a kitchen, and a living room with leather furnishings and a fireplace.

Brian rescued and transported the 1830 Chebogue schoolhouse from a community near Acadia, his hometown. Clapboard siding and cedar shingles make up the exterior walls and roof while wide pine boards were used for the flooring and wainscoting.

The open floor plan includes a kitchen with modern appliances, a half bath, and living and dining areas that open onto an outdoor terrace. A master bedroom and bunk room are upstairs along with a washer and dryer.

The Troop barn was slated for demolition in the Annapolis Valley, but Brian relocated it to Shobac for restoration. The post-and-beam structure boasts a 35-foot cathedral ceiling.

At 2,000 square feet, the barn is an ideal setting for weddings, retreats, parties, and performances.

The gabled roof on Enough House puts it in conversation with the adjacent Troop barn and Cheboque schoolhouse, but its Cor-Ten steel exterior makes it a unique addition to Shobac.

A 24-foot corner window frames a pastoral scene to the north. Steel elements inside the house resonate with the exterior cladding, and both old and new furnishings. Enough House sleeps five and includes a full bathroom and kitchen.

Point House stands on a peninsula that used to be a small fishing port. A dirt road leads to the shingled cottage and boathouse.

The northern side presents a traditional face of shingles and gabled roof while the southern side incorporates tall glass windows. The buildings are raised on concrete foundations.

In addition to cottage rentals, guests can reserve the entire Shobac campus for a secluded agrarian experience.