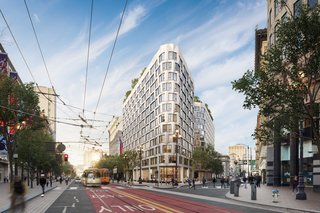 L37, formerly Group i, a San Francisco-based real estate development and management firm, has unveiled its vision for Serif – a new mixed-use development in San Francisco’s burgeoning Mid-Market neighborhood. Comprised of 242 condominium residences, Serif will also share its space with the sumptuously hip The LINE hotel, retail and dining experiences, and the legendary Magic Theatre. A collaboration between Bjarke Ingels Group, Handel Architects, IwamotoScott Architecture and Surfacedesign, Inc., Serif illustrates the revitalization of a rapidly changing section of Market Street.

Comprised of studios, junior one-bedrooms, and one- and two-bedrooms, residences range from approximately 450 to 1,200 square feet with prices starting in the $500,000s. Minimalistic and modern, with an eye toward the urban context, the residences at Serif are raw and industrial yet thoughtfully crafted— every detail is designed to complement the energy and eclecticism of Mid-Market. Serif residents will also have private access to indoor and outdoor amenity spaces including a landscaped rooftop solarium equipped with a library and bar, not to mention a chef-grade kitchen for private events. Additional amenities include a fitness center with yoga room and state-of-the-art fitness equipment, pet spa, dog run and 24/7 attended lobby.

“We are excited to reignite a neighborhood rich with history and culture,” said Joy Ou, Managing Partner of L37. “Serif will hold something for everyone, from streamlined modern living spaces to eclectic dining and entertainment, offering a community gathering place in the heart of Mid-Market. We are excited to bring this vision to life and look forward to working collaboratively with the City as we introduce a highly-anticipated destination to the neighborhood.”

Located on the corner of Market and Turk Street, Serif bridges the dynamic and diverse Tenderloin neighborhood with the retail and commercial district of Market Street and Union Square, reimagining the architecture of Market Street circa 1905. The bright white, textured facade takes cues from contemporary architecture, while the flatiron at Turk and Market recalls early 20th century San Francisco.

Serif is home to The LINE, a lifestyle hotel created by Sydell Group, which is known for its exceptional mix of entertainment, programming and culinary experiences. The 236-room hotel design was led by Sydell with interiors by Sean Knibb. The hotel will feature a ground-floor bar and restaurant in addition to a rooftop bar with panoramic City views. The LINE’s design ethos draws from both past and future, incorporating the neighborhood’s complex history and embracing its vibrant evolution into twenty-first century San Francisco. In addition to San Francisco, there are LINE hotels in Los Angeles, Washington DC, and Austin and another under construction in Atlanta.

While the Turk side of the building features a bike cafe, the Market side is home to a locally owned restaurant and bar, and a beer garden operated by The LINE hotel. In addition to the non-profit Magic Theatre, Serif shares the space with several local businesses, including a flower shop.

A confluence of the eclectic, Mid-Market is no longer filled with vacant storefronts, it’s where a new generation of restaurants and bars are cropping up alongside long-standing landmarks of the City’s theater, music and LGBTQ scenes. A short walk from the city’s best – Union Square, the Financial District, SoMa, the Tenderloin, Nob Hill – Serif truly is the middle of everywhere.

SoMa, the Tenderloin, Hayes Valley, Nob Hill, the Mission, Union Square, the Financial District—all are within a short walk of Serif, as are icons such as City Hall and the Ferry Building. Biking is also an option, with four bike-share docks within three blocks. For longer journeys, Powell Street Station, one block away, is a major stop for Bart, Muni, and one of the last remaining cable cars in the city. Numerous buses and the F Market streetcar also pass right in front of Serif.

Serif is located at 950 Market Street. Sales are slated to launch in Spring 2020 with completion anticipated for Q1 2021.

uploaded SERIF REVITALIZES SAN FRANCISCO’S MID-MARKET NEIGHBORHOOD WITH THE LINE HOTEL AND 242 CONDOMINIUM RESIDENCES through Add A Home.
Add your own project for the chance to be featured in Editor’s Picks.