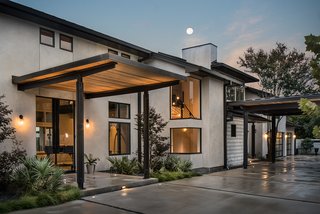 THE GOAL
To create a showplace for a professional motorcycle racer to host fellow athletes.

THE PROCESS
Although the original house sat on a hilltop with a stunning view of Lake Austin, its architecture failed to take advantage of the setting. The client wanted a better layout and stylish aesthetics that revealed the house's hidden beauty. Part of our strategy was to clarify roof lines throughout the structure, as well as in the entry and back patio canopies and the porte cochere. As demolition proceeded, it also became clear that other issues demanded attention: Waterproofing, drainage, and landscaping needed to be addressed in addition to renovation.

The expanded agenda meant that design flaws original to the house could be erased, too. Ductwork in the living room ceiling was reworked, and a dormer above the living area was removed to allow the creation of a double-height vaulted wood ceiling that extends into the upstairs master bedroom. The living room’s focal point is overhead: A dramatic steel motorcycle platform outside the bedroom presents a new industrial aesthetic while featuring two of the client's most cherished motorcycles.

We also opened interior spaces, removing walls in the kitchen and rebuilding the stairwell as open and expansive to invite maximum light. New high-end finishes such as blackened steel on the fireplace were introduced to update the look. Some finishes have personal significance for the homeowner: The master bedroom headboard and the office door were fabricated from pecan trees from the homeowner’s parents' property, which burned in the 2011 Bastrop wildfires. An ipe deck and barbecue area extend from the formal living area, further expanding the homeowner’s options for entertaining.

THE FINAL RESULT
The new layout and more modern aesthetic now meet the client’s social needs and are a powerful expression of his personality.

Texas Construction Company uploaded River Garden Trail Residence through Add A Home.
Add your own project for the chance to be featured in Editor’s Picks.