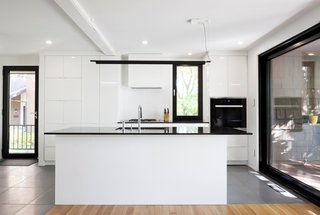 The Résidence de la rue de l’Espéranto is a renovation project located in Sainte-Foy, in the city of Quebec. The house, which was built in late 1960’s, possesses many architectural qualities, but needed to be reconfigured to respond to the owner’s lifestyle and a contemporary family’s needs. The brief was to reorganise public spaces and circulation within them, while preserving the home’s character.

The design of common areas has been redesigned to create an open space that would allow occupants to fully enjoy the surrounding nature and the natural light. This resulted in the extension of the windows and the demolition of a wall that was separating the kitchen from the dining room. The kitchen is now spacious, welcoming and all opened to the dining room and the living room.
The garden floor of the house has also been redesigned as an open area which can be divided by a bright yellow sliding door. In addition to adding character to the space, it provides the users with more flexibility.

The project was designed in collaboration with the designer Guillaume Sasseville.

uploaded Résidence de la rue de l'Espéranto through Add A Home.
Add your own project for the chance to be featured in Editor’s Picks.