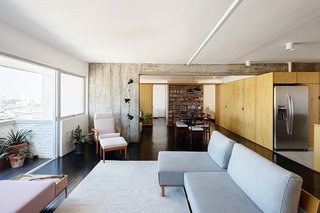 Apartment renovation in Mooca neighbourhood, located in the city of São Paulo - Brazil originally designed by the Brazillian architect David Libeskind, in the 60`s.
We were commissioned by a grandfather and grandmother to renovate the apartment where they grew their children for more than 35 years.
The apartment had received many small modifications throughout the decades resulting in a space without coherence, as it is common to many Brazillian homes.
Since the children had now grown up and left home, the couple wished that the apartment could be appropriate for them to live their old years and to enjoy the visit of their grandchildren.
The project was a long process of reflection and discoveries with the clients that went on for about 4 years from the first drafts until the conclusion of the renovation.
We took advantage of the fact that there is only one beam crossing the apartment to create a wide-open space, and the layout was though to create a comfortable space for the couple and to receive the visit of the whole family.
The dining table, also traditionally used for studying, playing and talking was positioned in the center of the apartment while the other rooms were positioned around it.
After the renovation was finished, the couple remarked that the higher presence of natural light, ventilation and the wider view of the city`s skyline brings them a feeling of calm and lightness.
The process of developing the project also helped the clients to rethink their way of living towards a life with less material assets. This wish that they had served as a guide to all decisions made in the project.

uploaded Renovation for the Kims through Add A Home.
Add your own project for the chance to be featured in Editor’s Picks.