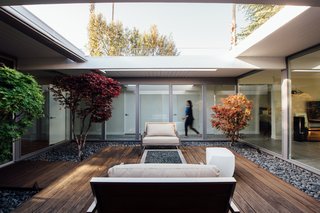 In a midcentury Eichler in Sunnyvale, California, a designer opens up the interior by connecting it to its surrounding picturesque views.

"We weren't looking for a home like this," says Pamela Lin—wife, mother and principal designer at Urbanism Designs, an interior design studio in the heart of Silicon Valley that was born from this very project. As the story goes, Lin and her husband were looking for new or recently renovated homes for their growing family, when they happened upon a midcentury Eichler. "I had a vision for how I wanted to renovate this home. We hired our own contractor so that we could do everything ourselves."

Working in the tech industry in San Francisco's Bay Area, Lin was familiar with midcentury architecture, admitting she had even been inside a few Eichlers before. She found the open-air construction of this home to be particularly captivating because of the distinctive entry atrium—a common characteristic among later Eichler homes. After working at Google as a project manager for nearly a decade, she decided to launch her interior design career, making this renovation her first project.

Fittingly, her design approach was led by one of Eichler's signature concepts—bringing the outside in. Like most of the homes he developed, the facade features very few front-facing windows—in this case, two slim rectangular panes of frosted glass and three ceiling-level panels above the garage. He achieved this quality of blending indoor and outdoor spaces with the help of skylights, floor-to-ceiling windows, atriums or courtyards, and transoms that faced an outside garden or swimming pool.

As most of the original interior had been gutted and remodeled by previous owners, the surviving design elements were just the bones, including the floor plan, facade, and most of the original framework. She used these structural components to heighten the indoor/outdoor quality, while also replacing frosted glass with clear, double-paned glass.

"I love that there's no wasted space. Every single square foot is maximized," says Pam.

Nine slender white columns divide 1,890 square feet around a centralized outdoor space that's enveloped by floor-to-ceiling glass panels. Crisp, parallel bands guide views around a layout that consists of open living areas, four bedrooms, and two bathrooms. The front door opens to this combined area, which Lin believes a wood wall originally separated the interior and exterior, and that the previous homeowner obscured the hallway with frosted glass. In her research, she saw that many people opted to cover atriums to add more interior square footage, but she chose to make it the crux of her design. "We wanted to see the atrium from everywhere in the house," says Pam.

Inside, she introduced midcentury furniture and paired it with a modern-inspired material palette. Given that the interior was more or less completely overhauled by the previous owners, Lin was able to explore her awakened interest in midcentury-modern design. "I've always liked midcentury modern, but I couldn't experiment with my style until we found this home."

For Urbanism Design's first project, interior designer Pamela Lin-Tam made the atrium the centerpiece of this Eichler. Here, the living area enticingly faces the swimming pool.

As most of the original interior had been gutted and remodeled by previous owners, the surviving design elements were just the bones, including the floor plan, facade, and most of the original framework. The owner used these structural components to heighten the indoor/outdoor quality, while also replacing frosted glass with clear, double-paned glass.

A few simple pieces of artwork can tie a room together without a huge cost.