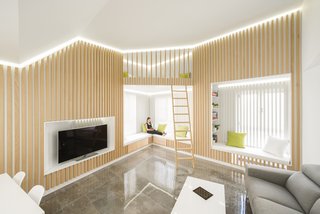 This project is based on the reform of an existing house in Petrer (Alicante, Spain), a construction of 86m2. The idea is to maximise space by connecting rooms. For this reason, the decision is taken to convert the kitchen and living room into a single kitchen-dining-living room in which the outstanding feature will be a unit that will cover the whole interior façade, bringing a new atmosphere to the room and addressing a series of determinants.

The main aims of this new interior lining are: to create an interior layer that will afford the required thermal insulation that is lacking in the existing façade; to involve the pillars that encroach 70cm into the interior of the living room in a new image that will dissolve their presence; to afford the room with a greater area for relaxation, as required by the owner, in the form of a continuous seat; to give the home a large amount of storage space. In the development of this unit, it is decided, furthermore, to provide the house with an extra room for occasional use, which will be reached using a ladder, thus taking advantage of the great height of free space at the back of the room. The ladder can also be attached to other particular points allowing access to the higher cupboards.

This interior lining of the façade is made up of a first layer of insulation, followed by white melamine panelling and finally at the front, whether or not there is an intervening cupboard, strips of natural beech wood measuring 4x4cm. There are two alignments in this unit, one finished with strips of beech in its natural colour and the other behind the continuous seat with varnished white strips. With the use of these strips a filter of light and of the exterior view is created in front of the windows in the way of interior shutters, thus creating a calmer and more homogeneous atmosphere. The strips placed in front of the windows also allow for full opening to access said windows. Moreover, the beech wood affords the warmth desired to contrast with the predominance of the colour white and the dark marble paved floor.

In the main room a sliding door 2m in width is installed. In this way, the room is connected via a corridor to the bathroom, which is separated from the corridor by a glass partition wall 2m in width, with a practicable integrated sliding panel that allows direct and full circulation between the room and the bathroom. Furthermore, this solution favours the entry of natural light from the window of the main room to this interior bathroom. In the bathroom, the whole opaque perimeter is surrounded with mirrors from a height of 1.20m, which gives the impression of spaciousness in this small room. The washbasin and surrounding top is designed as a single piece from a block of Carrara marble, being adapted in the workshop to the irregular shape of the bathroom.

Pablo Muñoz Payá Arquitectos uploaded Refurbishment for Niko through Add A Home.
Add your own project for the chance to be featured in Editor’s Picks.