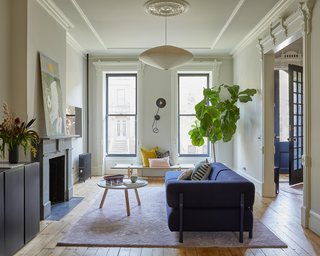 Putnam Townhouse is a Brownstone located in Brooklyn, NY. The home was originally built in 1884 in the Neo-Grec syle and, when purchased in 2016, was in an extreme state of disrepair. The project was a surgical “gut renovation,” where the electrical, plumbing and mechanical systems needed to be overhauled without disturbing the remaining mouldings and woodwork. The renovation breathed life back into the home, empowering the ornate historic elements by seamlessly integrating minimal, modern upgrades that quietly respect, instead of compete with, the gravitas of the original details.

The layout had barely been altered since the home was built, so the 19th century layout, with more divisions and smaller rooms, needed to be converted into new spaces that work for the way we live in the 21st century. The rear of the parlor floor was opened up with a large arch, both modern and nostalgic, which created a generous kitchen space while still paying homage to the original divisions of the townhouse. Similarly, a new arched opening was created in the Master Bedroom that allowed for a private passage and dressing room that connects to the Master Bathroom.

The home is intended to be the owner’s forever home, and it was important for the house to be able to accommodate a growing family and changing requirements. This renovation was completed on a modest budget, and a high priority of the project was to rework the bottom floor of the house in order to create a two bedroom income-generating apartment, but configure it so that the family can easily reclaim that space in the future.

uploaded Putnam Townhouse through Add A Home.
Add your own project for the chance to be featured in Editor’s Picks.