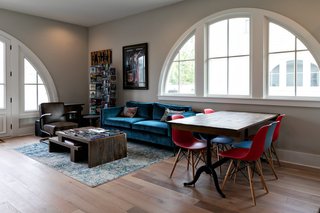 Stephen Brown recently moved from midtown Atlanta to Pinewood Forest (Fayetteville, GA) and works in the creative industry at Cookerly Public Relations (he’s sometimes known as the brainstormer in chief) as well as runs his own SilverScreenCapture.com movie review site. He was attracted to the pioneering element of a community fostering what it means to thrive built on the design ethos of new urbanism and adjacent to where many of the great creative conversations and storytelling are taking place (across from Pinewood Atlanta Studios).

He wanted his Huxley style terrace home (1,800 square foot, 3 bedroom and 2.5 bathroom with an open, inviting floor plan and 10' ceilings) to be a treasure trove of movie, theatre and advertising collectibles as well as a place he can host neighbors for screenings, group discussions and even his notorious Academy Award parties. He loves the proximity to parks, bike trails and a movie studio and has even helped curate movie screenings for the neighborhood. Since moving in, he has hosted everything from chef demonstrations to church gatherings to Super Bowl and Oscar parties in his eclectic home. The designer is Lew Oliver, home builder is McKinney Homes, and interior design consultant is Dana Lynch Designs.

uploaded Pinewood Forest Huxley Terrace Home through Add A Home.
Add your own project for the chance to be featured in Editor’s Picks.

The arched windows and front door of the Pinewood Forest Huxley Terrace Home keep everything open and illuminated. Dana Lynch Designs helped integrate the home’s Georgia nature-surrounded exterior in the wood choices for dining room and coffee tables with pops of red and blue color inspired by whimsical Baz Luhrmann movie posters such as 2001’s “Moulin Rouge!” Floors are by Authentic Reclaimed.

In a cove near the kitchen’s natural marble stone island, Stephen pays tribute to the American automat in black and white photography and tips a hat at his love of theatre with antique VIP seats from Charleston, SC.

McKinney Homes built custom trim into the home to house Stephen’s collections ranging from classic movie projectors to his own credentials from the 2016 Academy Awards ceremony.

Bar stools at the island and red and blue dining room chairs lead into a kitchen area decorated with international soda siphons and seltzer bottles. Kitchen cabinetry is by Bell Cabinetry and appliances by Bosch with sconces over open shelves by Visual Comfort.

A bar stand in the shiplap-laced cove and coat rack by the pantry is always ready for Stephen’s storied Pinewood Forest gatherings.

Tucked in a far corner of the room is a classic cocktail arcade cabinet of the 1982 video game BurgerTime. Stephen also has Crystal Castles and other nostalgic arcade games in upstairs collections.