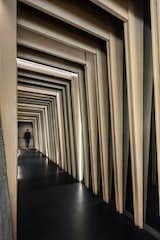 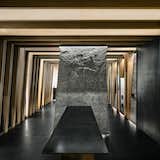 As the project continues, an impressive 8-meter-long corridor, composed of slender wooden beams that descend over the wall, creates a dramatic perspective, as well as a rhythm that continues towards the hall. Through a game of reflections in the mirror and a dim lighting, the commensal is guided from the gloom of the access to the light of the hall.

The reception, surprising with the dynamic way to the hall, where the kitchen's pass table functions as a visual auction and the commensal is received by the interesting assembly of the dishes, becoming it a show for the short wait for the table.

Passing through the reception, you will find the volume of the bar, a smaller hórreo, interrupted by the wooden shelves that house the bottles that serve the bar. The inclination in the stone walls, together with the light that emanates from them, creates the sensation that the heavy monoliths float.

Once in the living room, a latticework—conformed by 174 steel plate pieces and inspired by the white wings of the seagulls that can be seen in the Rias Baixas—takes over the room, creating filters and dynamic lighting as if it had its own light, giving a sense of privacy to it.