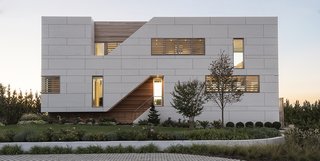 Bob and Margaret Bombara of Queens get away to the ocean whenever they can. Margaret, a retired educator, remembers trips to Staten Island “back when it was beaches,” and she and Bob have spent more summers on Long Island’s East End than they can count. Recently they’ve taken
up paddleboarding, which they’re getting the hang of steps from their newly built vacation home in Southold. “When we first stood on this property, before the house was here, and looked out, we were sold right away,” Margaret says, pointing at Long Island Sound 50 yards off.

Today the couple are at ease, but nearly five years ago, they witnessed the worst
that the ocean can do. When Superstorm Sandy pummeled New York in October 2012, their main home, a Tudor located less than a block from Jamaica Bay in Queens’ Howard Beach, was badly damaged. Margaret and Bob, who were traveling at the time, returned to find two of their cars submerged, the home’s mechanicals and parquet floor drenched, and a refrigerator bobbing in the basement.

In the weeks to come there would be much to consider, from repairs and insurance to their beachfront lot in Southold, which is even closer to the water than their Queens house. Bob, an attorney, had wrangled permits to develop the land after a protracted legal battle, but now they weren’t sure whether to move forward.

“We could have left it empty,” Margaret says, “and we thought about it after all the trauma we’d been through.” Ultimately, the inveterate beachgoers chose to proceed, albeit cautiously, with a newfound respect for Mother Nature’s might.

Fortunately, architect John Berg had been adamant, even before Sandy hit, that their project meet the highest standards of resiliency. “We knew we had to build a rock-solid house,” says Berg, who met the Bombaras through the contractors at Seifert Construction.

That meant going beyond hurricane windows and FEMA’s flood regulations, which required elevating the first floor 14 feet above sea level on wood pilings, and exploring emerging solutions to fortify the structure. Berg had heard of a formidable fiber-cement panel system from Europe called Equitone, and found that it was more moisture- and impact-resistant than the alternative cladding, stucco.

Margaret appreciated the material’s monolithic veneer and Bob liked that it was practically no-maintenance, and before they knew it, workers were assembling precut pieces from Germany in the street like a giant jigsaw puzzle. The panels were placed with a one-inch gap between them and the building, so that if the home’s skin does get wet in rain, it will dry quickly.

In contrast with the heft of its armor, the home’s interior is light and airy. Bob and Margaret say Sandy rattled their sense of security but also clarified their priorities for what a house should provide. In this case, more room for family to visit, less room for material things. “That’s what this house is all about, minimalism,” Margaret declares. “After Sandy, we lost so much stuff, and we’re not replacing any of it.”

Can smarter materials and better engineering mitigate the risk of living near the sea?

When Superstorm Sandy struck the East Coast in fall 2012, Margaret and Bob Bombara were in the middle of planning their long-awaited beach house on Long Island’s North Fork. The disaster, which flooded their main home in Queens, gave them pause. For architect John Berg, it underscored a vital fact—the Bombaras’ vacation house would need to be able to stand up to high wind, heavy rain, and intense storm surges.

The home, which is on Long Island Sound, is made of hardworking materials. Its Gore-Tex-wrapped plywood sheathing is protected by an Equitone fiber-cement rainscreen, which is the first line of defense during harsh weather conditions.

Seifert Construction installed the panels with open joints, yet the building’s thermal envelope is safe from wind pressure.

“We live in an old Tudor, so we’ve never had anything new. We said, ‘Let’s go for it—buy the land and make a house.’ Little did we know what we were going to face.” Bob Bombara, resident

The 2,500-square-foot house has four bedrooms with ensuite baths. It also has an office that allows Bob to work remotely. Twin Fork Landscape Contracting was hired to enhance the yard.

From there, a private walkway runs to the shore.