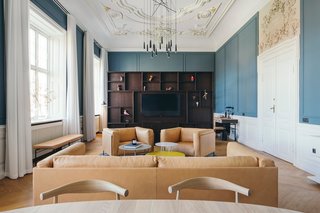 Danish design, and Scandinavian design more generally, has roots that extend far beyond 20th-century modernism, and the whole heritage is on display under one roof at Nobis Hotel Copenhagen. This classical edifice, a block from Tivoli Gardens in the heart of downtown Copenhagen, was once the Royal Danish Conservatory of Music. Now, under the direction of the Swedish architect Gert Wingårdh, it’s been utterly transformed. Behind that stately facade now lies a luxury hotel that showcases a warmer, more organic kind of modernism.

Mr. Wingårdh calls it an update on Le Corbusier, but Nobis Copenhagen conspicuously lacks the alien qualities that made Le Corbusier’s modernism so difficult to live with. The colors are rich but soothing, the textures are pleasingly organic, and the spareness of the interiors feels calm and controlled but never cold. And for all their visual subtlety, the rooms and suites are impressively luxurious; they’re designed less to be photographed than to be lived in.

These days you don’t go to Copenhagen without at least one eye on where you’re going to eat. Restaurant Niels, under the direction of the award-winning local chef Jeppe Foldager, serves Nordic and French dishes, painstakingly sourced from intensely seasonal local ingredients, in a dining room that doubles as a design tour of the Nordic 20th century. You’re in good hands.