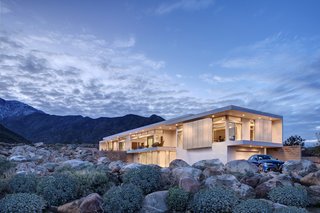 Desert Palisades is poised to become the new model for extraordinary, modern architectural vision, melding the rich unmistakable heritage of Palm Springs with a forward-thinking design vision. Featuring a collection of homesites nestled along the sun-drenched hillsides of Chino Canyon, Desert Palisades is the first community in Palm Springs that from the ground up will adhere to the ideals that represent the very best in midcentury and contemporary architecture.

Ten years in the making, Desert Palisades made its debut during Modernism Week, unveiling the first two homes within its gates, each representing the architectural ideals the enclave aspires to represent. Desert House No. 1 is a contemporary, split-level design by acclaimed Palm Springs-based architect Lance O’Donnell of o2 Architecture, who is credited with carrying desert modernism into the 21st century. The second is based on a never-before constructed plan by famed midcentury modern architect, Al Beadle, whose“Beadle Boxes” were famous for their structural simplicity. The Beadle House was the result of a collaboration between O'Donnell and Developer & Builder Mike Yankovich of Better Built Inc., who personally asked the late architect's wife for access to the Beadle archives.

The last hillside enclave in the Coachella Valley, Desert Palisades features homesites appointed to engage with the topography and preserve the natural contours of the land. Community guidelines serve as inspiration, encouraging residents to enlist the world’s most prominent architects to explore new ideals in desert modernism while upholding time-honored, midcentury principles.

Residents are emboldened with the space and freedom to explore their creativity and shape their community, creating homes of rare architectural significance. The first homesites released for sale offer varying elevations and orientations, with views encompassing the Coachella Valley floor and the surrounding mountain peaks. Each property is utterly unique, with no flat-grade pads to be constructed and no mass grading to occur. The mission of Desert Palisades is to lead a movement in modern architectural design by creating a cutting-edge, sustainable, and visually enriching enclave that harmonizes eloquently with the landscape.

uploaded Desert Palisades Chino Canyon through Add A Home.
Add your own project for the chance to be featured in Editor’s Picks.

Desert House No. 1 choreographs fluently with its Chino Canyon surroundings.

The Beadle House appears to float above the landscape, set upon a pedestal-like foundation.

The entry gate displays the delicate balance between the natural and the manmade.

The view from above the Desert Palisades enclave.