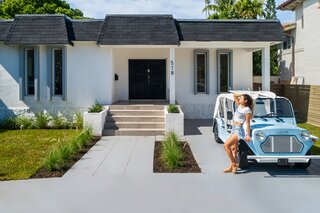 Anastasia Ashley is no stranger to making headlines, in 2013 the model/surfer became an internet sensation after a video went viral of her twerking to warm-up before the SuperGirl Pro tournament in Oceanside, CA. Anastasia has been a public figure in the surfer world, throughout her career as a pro surfer she has won multiple titles including the 2010 Pipeline Women’s Pro in Hawaii, she conquered gigantic waves on the Oahu’s Outer Reef for an XXL Award nomination, and has become one of the most successful surfers on the women’s tour. Anastasia was also a cast member on Naked and Afraid in 2017 but quit the show just after six days of filming for being attacked by sandflies all over her body.

Now adding real estate to her resume, Anastasia Ashley has sold her charming Miami Beach single-family home for a profit. Anastasia purchased the property located at 518 W 30th Street, Miami Beach in 2017 for $720,000. The property was listed in May 2020 for $1,000,000 with Miltiadis Kastanis and James Hait of Douglas Elliman and closed for $870,000, representing the buyer is also Kastanis and Hait of Douglas Elliman.

uploaded Naked & Afraid Contestant & Pro Surfer, Anastasia Ashley Makes a Profit on Miami Beach Bungalow through Add A Home.
Add your own project for the chance to be featured in Editor’s Picks.