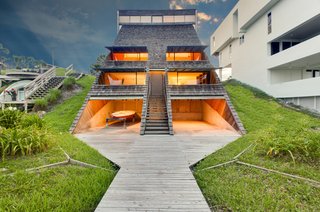 Willam Morgan (1930-2016) was an architect, historian, and author based in Jacksonville, Florida. He studied architecture at Harvard University under Walter Gropius and Jose Luis Sert, trained with Paul Rudolph, and won a Fulbright grant to Italy. Early in his career, Morgan began a lifelong interest in indigenous architecture and published his research in multiple books, including 2008's Earth Architecture: From Ancient to Modern. His notable projects include the Florida State Museum of Natural History in Gainesville and the Dune House, which incidentally borders this residence currently for sale, designed for his family and built in 1972.

According to scholar Robert McCarter, Morgan's design was "inspired by the stepped structure of the ancient Roman seaside town of Herculaneum" and responded to the site's sandy slope. The house consists of two triangular masses which meet at the dune's crest. One triangle fronts the street entry, while the other follows the incline down to the beach.

At 1,800 square feet, the stepped interior plan is both capacious and cozy, thanks to the high ceiling in the great room—where the triangles meet— and walls lined with rough-sawn western cedar siding throughout.

A mezzanine floor, balanced over the kitchen and fireplace, hosts the principal bedroom suite and the architect's study. Clerestory windows bring in generous amounts of light.

The "children's bedrooms" were then located on the floor below, in order to separate them visually and acoustically. Complete with their own bathrooms and private viewing decks, these rooms make excellent modern guest suites.

Overall, the home is a unique homage to its setting. Writes McCarter: "At once pyramid, sails and shed roofs, the triangular volumes of the house echo the form of the dunes, deflect the winds of coastal storms, and open to the ocean view."