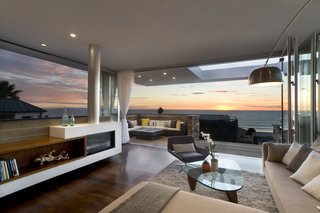 The project consists of a new 3,500 sq. ft. Single-Family Residence located in the City of Manhattan Beach. The site for the Project is located 4 blocks from the beach on a southwesterly oriented lot with direct ocean views. Only 33 feet in width and 68 feet in length, the project is designed vertically over two stories plus a basement. Designed to simultaneously take advantage of the unobstructed ocean views and edit out any views of neighboring houses, the building is a study in editing and defining the use based upon the site and orientation. Utilizing the site’s maximum allowable area, the building is nestled into the sloping site and places all the public spaces on the top floor to take advantage of the most view possible.

Tectonically, the building is a study in spatial definition thought folded planes of material each performing in a different way. How the building meets the sky, is perceived when entering and due to it’s vertical nature, how it is perceived while moving through it in the vertical direction drove the design.

Three folded planes wrapping around each other creating the building envelope defines the building. The main folded plane is the east exterior wall and roof that on the second floor appears to float above the lower building masses. This plane is clad in white stucco that will present a clean and crisp line against the sky. The materiality of this plane runs from the interior to the exterior elongating it and seamlessly combing the public spaces from interior to exterior. The second plane is the horizontal mass that runs along the buildings south façade; wrapping the cantilevered west massing and returns back to the building. This plane defines the entry and Master Suite and is clad in varying thickness re-claimed wood siding to create the feeling of texture and plays with shadow and light. The third plane is the vertical component cast in board form concrete; it runs from the basement until the second floor and acts as the heart of the building.

uploaded Manhattan Beach Residence through Add A Home.
Add your own project for the chance to be featured in Editor’s Picks.