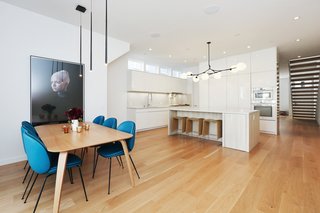 When the new homeowner's purchased this unique property it had lived many lives but was in disrepair. It was certainly unique in that there were two homes on the site and they were a mirror image of each other. The existing houses were small, dark and not surprisingly compartmentalized into a series of small rooms. Over the years the spaces were renovated and added to in an ad-hoc fashion with substandard construction.

The new owners are a young family with a young daughter and they were seeking to create a larger family home on one side and a rental home on the other.

The two sides were fully gutted and expanded both vertically and horizontally which was quite a challenge considering the small lot. We were able to create a nice back yard and a series of roof decks, some very private, to give the family a few options for enjoying an easy connection to the outside.

In the end we were able to create a three story home for the client that had a more open floor plan and better utilization of the space for the family of three. On the opposite side we created a ground floor studio and two story apartment above.

As in most rewarding projects the client's keen eye, energy and wonderful sense of style truly helped make the project fun to work on; check out her instragram @julianne_casper

patrick perez/designpad architecture uploaded Lower Pacific Heights through Add A Home.
Add your own project for the chance to be featured in Editor’s Picks.