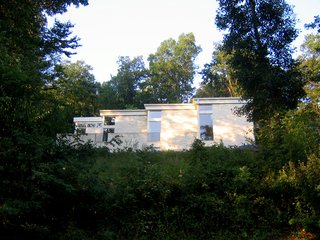 The client’s one stipulation for this project was the use of the Penstar Concrete Form Masonry Unit (CFMU) building system. Some of the many benefits of CFMU are speed of construction, high R-value, energy efficiency, and economy. They come pre-made with an exterior and interior face, in this case cream split face blocks on the exterior and white polished blocks that have a marble like appearance on the interior. In keeping with the economy of the project the windows are all from the Architect Series of Pella windows with matching aluminum cladding and gutters. The main challenge of this site, its one to one slope, informed much of the homes design, including the 400 sf terrace on the second floor overlooking the valley. The terrace is accessible from the kitchen and the living room and forms a flat roof above a portion of the first floor below. The rooms of the third floor of the house are accessed by a dramatic walkway separated from the double height living area by a 42” glass rail. Other interesting elements of the house are the open steel and oak stair and the custom lighting features that the CFMU allowed to be built into the walls. The use of the cfmu in a residential project is fairly unusual. these blocks are very energy efficient because of there high r-value and make construction very quick since they come pre-assembled. building with them requires all of the electrical and plumbing systems to be completely thought out ahead of time since they can not be changed once the walls go up. all of the electrical conduit and plumbing get laid in the walls and the concrete is poured around them making any changes impossible. the cmfu alleviate the need for conventional drywall and paint- they can be left exposed on the interior of the house. the cmfu also allowed for some interesting custom lighting opportunities both inside and outside of the house. outside cmfu units were removed and replaced with wood blocking along the garden steps and on the terrace during the concrete pour. once the concrete had cured this wood was removed and replaced by a electrical housing covered with a plexi-glass diffuser to create landscape lighting. similarly inside cfmu units were removed creating ambient lighting through out the house.

kimberly peck uploaded Leesburg House through Add A Home.
Add your own project for the chance to be featured in Editor’s Picks.

exterior from base of hill