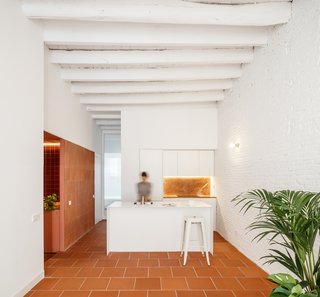 CRÜ studio removed a series of walls that divided the long and narrow perimeter of their new project la Odette – la Olga’s younger twin. The living area is pulled towards the back of the building, so that the bedrooms could absorb part of the light that is filtered through the main façade.
In la Odette CRÜ worked on contrasts between natural materials to break the volume up into planes and to enhance and reinforce the distribution and use of spaces, which makes the spatial lecture have some complexity, being less global. This is translated into a back set made of exposed brickwork and vaulted ceilings both painted in white, and an overlapping layer given by terracotta and reddish tiles and paint.

These warm accents help to break up the space into specific areas. Terracotta tiles placed reversed cover a section of wall beside the kitchen, while the hallway and bathroom are finished with maroon tiles and raw bricks. Terracotta tiles cover floors throughout the space.

"We covered a piece of a wall with the tiles that were left over from the flooring, but they were pasted on the wall showing their back, creating a powerful vertical terracotta texture on a white wall," architect Clàudia Raurell.
"We found La Odette with way too many partitions regarding its dimensions and its availability of natural light and ventilation," she continued.
"We worked on contrasts to break the volume up into planes, a gesture that makes the space have some complexity."
The kitchen is fitted with red polished marble from south Spain that contrasts a white central island.

A sliding corrugated glass door separates the master bedroom and the living area, allowing light to pass between the two spaces while maintaining privacy.

uploaded LA ODETTE through Add A Home.
Add your own project for the chance to be featured in Editor’s Picks.