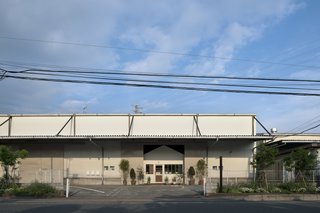 Before becoming a so-called commuter town, this area enjoyed a geographical advantage and thrived from the many warehouses built here since the postwar era.
The local population grew after railway lines opened in the 1980s, placing the city within commuting distance of Shinjuku. Even today, one finds neighborhoods with condominiums and ready-made homes next to warehouses.

This set the scene to decide how to put a former packaging plant and storage warehouse to good use after the business was discontinued due to succession issues.
Personally, I thought it would match the feeling of the neighborhood to somehow keep this charmingly industrial warehouse intact, with its inviting ambiance.
I realized that it could also meet local needs. Tokyo is just a short ride away from a nearby train station, but converting the building to an office space would have the benefit of letting members of the community work here while living here, allowing them to spend more time with their family.
Soon, it grew into a project with people who wanted to start a business here, to provide them with a local workspace.
Interior design also involved a serendipitous match with local resources. Fixtures and furnishings inside consist of repurposed pallets from a forklift pallet manufacturer in the neighborhood.
In this warehouse renovation, it was tempting to try to use the entire space, but in consideration of air conditioning efficiency with 15-meter ceilings, we took a house-in-house approach and set up ceilings.
The large warehouse doors are closed each evening, restoring the ambiance of an older era, and they are opened each new business day to reveal a newly updated inner façade.

uploaded Kawagishi Warehouse through Add A Home.
Add your own project for the chance to be featured in Editor’s Picks.