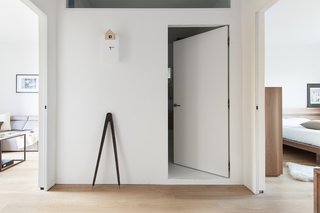 Internal restoration of a 110 square meter apartment, located on the top floor of a building in the historic center of Bassano del Grappa bombed during the Second World War and then rebuilt in 1964.

The unit is on one level. The restoration did not include demolition or re-modulation of space, in order not to interfere in the delicate building static. The intervention focuses on a contemporary reinterpretation of typical '60s Italian apartment space.

The rooms are built around the entrance lobby characterized by the presence of a large high glass window which brings light to the bathroom. The entrance lobby appears as the inner part of a silent and white cube in which, the perception of space, varies according to the opening or closing of the doors. The kitchen is divided into a dining area and a cooking zone and this separation is marked by the change of flooring, from timber to white resin. The living room is interpreted as an intimate space for relaxation where lighting is soft and concentrated in selected spots.

The bathroom has been completely redone using white resin surfaces, wood and a blue piece of furniture in the shower area. The choice of material / color palette aims give brightness to the windowless bathroom.

Didonè Comacchio uploaded Iterior DM through Add A Home.
Add your own project for the chance to be featured in Editor’s Picks.