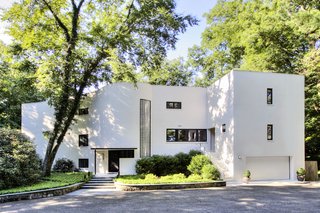 Built in 1938 this home was designed by Arthur Holden and sits on almost 5 1/2 acres of land.

After army service during World War I, Mr. Holden joined the architecture firm of McKim, Mead & White. In 1920, he established his own firm, Holden, Mclaughlin, and Associates.

Holden is perhaps most noted for advising Frank Lloyd Wright on the design of the Guggenheim Museum in 1949. His architectural achievements were acknowledged in 1957 when he received the Medal of Honor from the New York Chapter of the American Institute of Architects.

uploaded International Style Home through Add A Home.
Add your own project for the chance to be featured in Editor’s Picks.

Toward Living Room From dining room