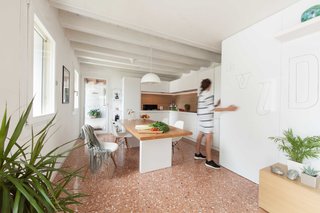 The dwelling is a 120mq addition to a rural complex in the Veneto countryside. The addition was built in the early 1900s and has undergone a restoration in the late 90s to be used as an office. In 2012 it has been reverted to its original function.

The house is developed over three floors. The living room is located at the ground floor and the rooms and the service rooms on the upper floors. The floor at the time of the last restoration was a red “pavimento alla veneziana” which has been maintained and restored.

The spaces are characterized by the alternation of white surfaces and natural wood ceilings.

The living room stair, which was done during the last restoration in the 90s, declares its misplacement. An operable wall, with a writable film layer finish, is created in order to hide the actual staircase giving the space a more contemporary tone and allowing the recovery of the understair storage space.

Didonè Comacchio uploaded House PB through Add A Home.
Add your own project for the chance to be featured in Editor’s Picks.