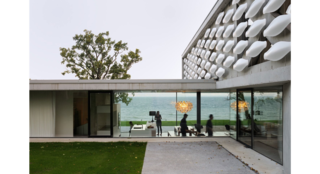 The house on the lake is a projet designed by the french architecture studio AUM for a couple with two children in 2012. It is located on a narrow plot whose natural slope reaches the shores of Lake. Pierre Minassian, the architect of the project, followed this operation with his team of architects for 3 years. The house is entirely made of raw concrete and its structure is exceptional because of its apparent simplicity and its truthful sophistication.
The dwelling consists of two main levels. On the ground floor are situated the largely open reception rooms, such as the living room, the kitchen and the dining room, as well as a guest room and an office. Upstairs is the sleeping area with three bedrooms and their bathrooms as well as a children's playroom. The house is located in the skirt of the slope, near the shore of the lake, contrary to the local constructions further down the road. Their work as architects was to create a direct communication between the volumes constructed and the landscape of disconcerting beauty. The other main desire expressed by the client was not to obscure the view of the lake from the top of the plot and the street. Thus, when one enters the property, the gaze has no obstacle and one can see the opposite shore of the lake though quite distant.
The volume of the house results from the assembly of two boxes with pure lines.

The first box forms the ground floor, wide open. The second, like a beam of incredible weightlessness, comes to bear itself on the low volume and creates the floor stretching in cantilever towards the lake. The whole of the volume rests only on a single column of great finesse which illustrates all the duality of this construction.
At the intersection of the two volumes is a double height which allows the living room to have all the necessary volume for a reception room. Only a narrow bridge stretching in the middle of this space creates the link between the parental suite overlooking the lake and the children's rooms overlooking the garden. The house on the lake rhymes with transparency. Upstairs in the West facade we have developed a contemporary mashrabiya made of Corian® resin thermoformed shapes. This sunscreen comes to control the energy and heat input of the house at the same time giving a special vibration to the facade. This latticework is fully assembled on site by our architecture studio.
Environment: This house is extremely efficient from an energetic and environmental point of view and meets the requirements of the BBC label. Thus a multitude of technical solutions have been developed to conserve the raw concrete apparent outside and sometimes inside. In order to keep apparent the maximum of the raw concrete structure, the roof is insulated from the outside with a system of extremely efficient thin insulating panels. The reinforced concrete walls are divided with thermal breakers and thermal insulation.

uploaded House on the Lake through Add A Home.
Add your own project for the chance to be featured in Editor’s Picks.

Transparency and view of the Geneva lake

The signiture latticework perched ontop of the entry

The mashrabiya made of Corian® resin thermoformed shapes

The masharbiya and the lake

The house overlooking the lake

The living room and its void

the custom made table and its kitchen

The latticework made of Corian® resin thermoformed shapes

The latticework made of Corian® resin thermoformed shapes