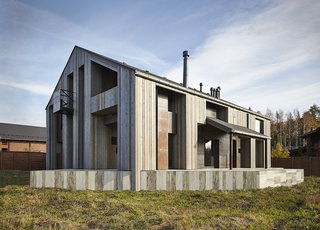 The traditional in this region approach of building using lumber lays at the core of this house construction. However, the thickness of the walls of such buildings does not meet modern requirements for insulation, therefore it was necessary to insulate the walls on the outside which prompted a complex malleable design of the facades. The facades are composed of two layers – recessed and metal trimmed, and exterior - trimmed with boards. It looks like a large wooden structure was fitted over a smaller metal one. Extremely concise outline of the building and the rich development of its facades meld in contrast. Windows of the house are either recessed into the volume or, on the contrary, "pulled" out – some of them lay in the plane of the metal layer of the facade and some in the plane of the wooden one. Thanks to this solution there are either bay windows or cozy lodges in the interior.

The inner space of the house is designed with the same complexity. The first floor is designed as a common guest area comprised of kitchen, dining area, fireplace and lounge that revolve around the staircase. These rooms open to the garden, so they have picture windows floor to ceiling and the dining room is adjacent to the terrace. One window in the living room opens into garage, where the owner plans to keep his collection of designer motorcycles, thus it becomes a show-window for these beautiful units and is equipped with appropriate lighting and brick "backdrop". Private zones are "strung" on the staircase at the center of the building, each of the zones has its own level. Library is designed as a balcony over a part of the living room. The master zone, comprised of the bedroom, study, dressing room and bathroom ends with vast loggia. As there are many levels, some of them are connected with the staircase via suspended walkways. Almost every area of the ​​space is broken down into additional sublevels - a podium or, on the contrary, deepening of the floor in front of the recessed window, and there is a high loft for sleeping in one of the kids' bedrooms.

Wood, sheet metal and plywood are used in the interior design. The walls of the garage and the volume formed by metal structures of the stairs one the first floor, are built out of the dark brick. The wood is tinted in separate shade at each level, each of the shade is close to the natural color of the wood and rangers from light silver to deep brown. These shades are manifested in the brightly-striped toning of the boards on the facade, which allows to combine the external and internal appearance of the house into a single image.

uploaded House in Duhanino through Add A Home.
Add your own project for the chance to be featured in Editor’s Picks.