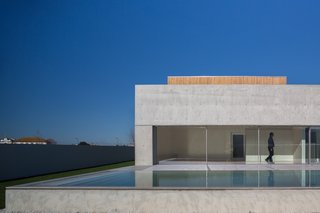 To avoid the massive effect of the house on the elevations, Nu.ma designed a set of lines, merging the floors and establishing some rules on the windows and facade finishes.

The site
The lot, where the house is inserted, have a non-regular shape, longitudinal and perpendicular to the street Dr. Egas Moniz, Avanca. The solar orientation (from the street to the interior) is North - South. Concerning the topography, the lot has a slope of 85cm, from the entrance.
Inserted in a consolidated urban area, and to ensure the privacy, the program of the house was turned exclusively to the interior of the lot.

Formal and functional constraints
Being inserted in a planning with approved rules, the shape of the building was restring by those rules and the principal volume should have 9x9m and two floors. On south of this volume another volume with 6m length and with only one floor.
We start with a platform merged on the terrain, were the house was inserted.
To avoid the massive effect of the building on the elevations, we designed a set of lines, merging the floors and establishing some rules on the windows and facade finishes. The result was the division of the elevations in three equal parts: S0+S1+S2 (2.1+2.1+2.1m)
This rule allowed to create a recess, trough the rotation of the section S0, to emphasise the entrance on the house.

Program
Concerning the program of the house, the interior spatial distribution is separated by function and by floors. The social/service area, at the ground-floor, is composed by the entrance hall, the toilet, obbice/library, kitchen, dining/living room, garage and laundry.
On the 1st floor, the private area, is composed by the rooms; toilet and the master suite. The master suite as a direct access to the exterior terrace at south. This last one with a exterior connection to the exterior swimming pool on the ground floor.

Ivo Tavares Studio - architectural photographer uploaded House in Avanca through Add A Home.
Add your own project for the chance to be featured in Editor’s Picks.