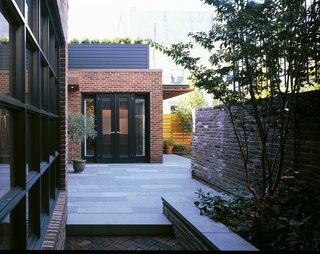 The dense urban environment of Center City Philadelphia doesn’t often provide in-town residences with generous exterior space. This 19th century townhome is unusual in that it does not front onto the street it addresses; one enters the property through a walled side garden accessed from Lombard Street. During schematic design the client was presented with the rare opportunity to purchase an adjacent, overgrown, vacant lot perpendicular to her home. The resulting uniquely shaped site forms an L, providing for front and rear entrances on two separate streets. The client initially wanted just a kitchen renovation. Through an extended schematic design phase, it was discovered that an ambitious larger-scale remodel of the entire property was needed to realize the potential for making the ground floor and gardens more generous and spatially interconnected.

In the end the ground floor and exterior spaces were entirely reconfigured. The basement was finished and expanded with a guest suite, laundry room, and storage. The dining room was enlarged; the main circulation path through the house was widened; a new powder room, anteroom, and closets were provided; and a large eat-in kitchen capable of accommodating full on-site catering services was added to the southeast corner of the newly formed L-shaped site. The kitchen addition’s bluestone floors continue out to the exterior paving to enhance the relationship between inside and out. A path of the same stone extends to a new garden shed that fronts onto 23rd Street. The shed acts as a threshold and gateway into the private realm of the new garden.

A clear stained cedar fence and carefully placed allee of trees supply additional privacy from neighboring buildings. The original entry sequence from Lombard Street was preserved, while the grading, paving, and plantings were redesigned and formalized into three distinct tiers that create outdoor rooms for entertaining. Large areas of new windows and glass doors bring abundant daylight deep into the home and visually connect the interior of the house to the expanded and remodeled gardens.

RobitailleCurtis uploaded Fitler Square House & Garden through Add A Home.
Add your own project for the chance to be featured in Editor’s Picks.

A view from the Lombard Street entry garden. A new terraced series of patios creates generous outdoor rooms for the owner who entertains frequently. The new kitchen addition, expanded dining room bay, and sensitive material selections; making use of herringbone brick pavers, Pennsylvania bluestone pavers, and dark painted wood framed windows and doors work to complement the historic 1860's townhome and blur the lines of what is new and what is original to the property. By RobitailleCurtis

A view towards the new kitchen addition and hidden garden. Herringbone brick pavers and Pennsylvania bluestone play nicely with the historic brick of the original 1860's townhome.

At the threshold between the public realm and the private. This image is taken at the point of entry to the garden, adjacent the garden shed and driveway that it conceals. In view are the brick pavers, cedar fence, bluestone treads, board form concrete water feature, and the new kitchen addition with roofdeck beyond. By RobitailleCurtis

A Pennsylvania bluestone floor with radiant heating, American cherry cabinets, and Ann Sacks tile backsplash, and abundant daylight make for a nice place to cook and entertain. By RobitailleCurtis

Pennsylvania bluestone flooring, American cherry cabinets, Ann Sacks tile backsplash, and a skylight in the right place make for an inviting place to cook and entertain. By RobitailleCurtis

A view from the kitchen to the garden shed and board form concrete water feature. By RobitailleCurtis