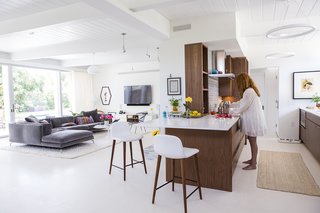 Maury Strong: I want fresh blood when it comes to houses. Ron and I have been together 16 years, and I’ve moved him to a couple of different countries and a bunch of different cities, and to a number of different homes in each city. We were living in New Orleans’s Garden District, and I’m looking, and I see this really cool midcentury house right out on the lakefront in Lakeshore. I call our friend Wayne Troyer, who ended up being our architect. We go to the open house and every architect in town is there. We were like, “Damn, this place needs a lot of work.” By the time we left and went to brunch, they had four offers.

Ron Caron: Maury didn’t know at the time that it was six houses down from my childhood home. I had never been inside, but I had passed it on my bicycle many times.

Maury: His parents recall it being built.

Ron: My parents built a new home for maybe $20,000. They lived there for 50-odd years until Katrina came. This neighborhood had eight feet of water—the house we’re living in was inundated.

Maury: Somebody had bought the house the day before Katrina. They had to sell it, and somebody else bought it and did a pretty crappy job restoring it—a real patch-up job. We’d been through a couple of renovations together before, so we knew that we were planning to gut it and create a new foundation, new roof, new everything. We really weren’t scared to undertake the work. We knew exactly what we were going to do, and that was to bring Palm Springs to New Orleans.

Our friend Wayne started to draw up some amazing plans, keeping the original intent intact but making it more contemporary. The people we bought the house from had the original plans, so we were able to say, “If Curtis and Davis were alive today and they had the technology and materials that we have available, what decisions would they have made?”

The previous owner hadn’t done that. They painted over all the brick. They used different materials outside and inside. So we stripped all the paint off the brick and we left it natural. And then we made sure that if you saw one material inside, it continued outside.

Ron: We knew that with the right touch it could be something magical, like maybe it had once been.

Maury: It took two years from “go” to “whoa.” Was it more than we expected to bite off? Yes. There were plenty of tears. We wanted a cohesive feel throughout the house—almost like a paper doll, where you start with the undergarments. You’ve got this clean, open white shell with the limestone floor and the plaster walls and you’ve got the brick, and then we put the same cabinetry in the kitchen, the bar, the guest bathroom, and the master bathroom. It lets the furniture and the art be the accents throughout the house.

Ron: If you’re in the backyard at night, looking into the house that’s lit up behind the glass, you can’t believe that you live in this space. You can see each room, and it’s beautiful. Just beautiful.

Maury: For the first time in our lives, we feel like we don’t have to keep moving.

An existing brick wall was dismantled, cleaned, and rebuilt to celebrate its patina . It now showcases an artwork by Blake Boyd.

The furnishings are a mix of inherited midcentury pieces and eBay finds, including the circular Danish chair with a woven seat in the living area. The All White paint seen throughout the house is by Farrow &amp; Ball.

Custom curtains by Katie Koch Home offer privacy in the master suite, where Ron plays the trumpet. The couple own a mix of new and vintage Mies van der Rohe Barcelona chairs.

Of the facade, Maury says, “It doesn’t stick out like a sore thumb, but it’s definitely one of the cooler houses in our area.”

The kitchen and bar millwork is ApplePly with a walnut veneer.

In the master bathroom, a BainUltra Essencia freestanding tub with an Axor Starck filler offers a perch for the couple’s granddaughter Arabella and her cousin Alexandra. The built-in vanity is made of the same ApplePly material as the kitchen cabinetry.

Outdoor Tub: A tucked-away bathtub provides a private backyard oasis. “We kind of got carried away,” resident Maury Strong recalls of the decision to place the 59-inch freestanding Keren basin outdoors. “My view was, ‘Let’s just do it all.”’ The extra effort paid off—the outdoor bath is among her grandchildren’s favorite parts of the house. Her husband, Ron Caron, also enjoys relaxing there.

Plantings: Evans + Lighter Landscape Architecture, contractor Sandra Tomasetti, and architecture firm studioWTA collaborated to develop a roofline without gutters above the walkway and carport. Instead, water is channeled to feed the garden. The result is a California-inspired yard with geometrically laid-out plantings rather than grass. “It’s rows of green with mulch permeating,” Maury says.

Sliders: At the back of the house, floor-to-ceiling LaCantina sliding doors replaced glass panes with a transom and clerestory above, enhancing the link between indoors and out. The residents wanted to stay true to the spirit of the midcentury house and felt that the architects Curtis and Davis would have embraced the technology if it had existed when the house was built in 1953.

Appleply Cabinets: Conner Millworks created the custom casework throughout the house. Although the residents initially considered solid hardwood, ApplePly composite with a walnut veneer proved to be a more sustainable alternative. The material, which is sealed with a matte-finish conversion varnish, appears in the kitchen, the bar area, and even the master and guest bathrooms.