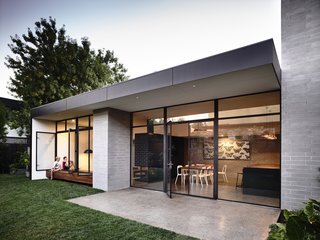 Ninety-nine years after this 1915 Edwardian-era house was built, Australian firm Preston Lane transformed the interior via a remodel and extension that deftly blends old and new.

To better maintain the residence's street facade in its suburban Melbourne, Australia, setting, Preston Lane tucked the addition behind the roof line of the existing house. Next, they adapted previously unused attic space into two bedrooms, a children's playroom, and a family bathroom. On the ground floor, a former parlor and dining room was reimagined as a bedroom suite, while a new, open-plan extension fosters living areas that now connect to the rear garden.

The architects highlighted, rather than hid, the contrasts between the old construction and new. For instance, the backdrop in the new kitchen is the former exterior red brick wall. A window in the ground-level bathroom now overlooks an office alcove. According to the firm, such an approach creates an "honesty to the original elements of the house."

Juxtaposed against those elements, the house's new material palette delivers a pleasing textural contrast. A concrete block wall on the southern boundary provides a spine for the new addition, as well as a background for art. The polished concrete floor is a graceful successor to the wood floor elsewhere. Black glazed bricks on a dividing fireplace wall between the living and dining spaces speak to the home's original red brick while amping up the drama.

Natural light and a thoughtful use of color knit everything together. Skylights in the upper level and a ground-floor guest bath bring in sun. Full height steel-framed doors and windows offer views and link the interior to the backyard. Bright teal carpet on the stairs, a color then judiciously repeated both upstairs and down, delineates where the new construction abuts the original structure.

A steel-and-glass extension hosts the main living spaces and flows into the backyard.

The architects highlighted, rather than hid, the contrasts between the old construction and new. For instance, the backdrop in the new kitchen is the former exterior red brick wall.