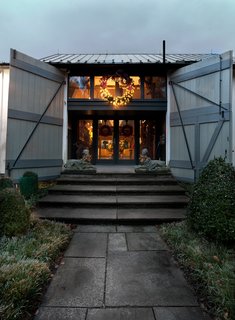 The featured home belongs to Rafael Novoa, the principal designer of Rafael Novoa Interior Design. It's located about a half-hour outside of Philadelphia. Rafael splits his time both personally and professionally between Bucks County and Center City, Philadelphia, where he has an apartment at the Ritz-Carlton. Rafael and his partner, Robert Lieberman, bought the Newtown home, a retrofitted barn, several years ago and have spent much of the time since renovating and redesigning. (Though, the brunt of the renovation was completed four years ago, in 2013. And Rafael did all of the structural and interior design himself, including the living room fireplace.) The home is six bedrooms, five bathrooms, and 8,000 square feet in total.

uploaded Eight Bells through Add A Home.
Add your own project for the chance to be featured in Editor’s Picks.

The dining room. Two seating areas are divided by a small lounge that overlooks the backyard and the pool.