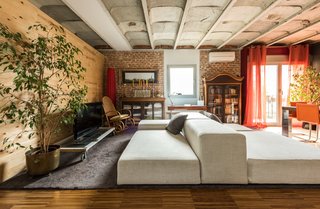 100m2 house located in the Colonia Virgen del Pilar, set designed by the architects Eduardo Olasagasti and Luis Gamir (1942-1947) in 4 phases. Blocks of houses between pedestrian landscaped squares. It is an economic housing built with brick walls and reinforced concrete slabs.

The absence of interior load-bearing walls, the structure of two centered concrete pillars, and the triple façade, allows a lot of freedom to create open spaces. The lines of work were to bare the building to get its structure and construction system in sight: concrete, bricks, prefabricated vaults, so that the system itself was a part of the design and gave its own character to the house.

The architect Pablo Echávarri was in charge of designing the house for himself, with the double objective of the search for honesty in the constructive system that brings the house and their own needs, and style.

uploaded Echávarri house 100m2. Loft between gardens. through Add A Home.
Add your own project for the chance to be featured in Editor’s Picks.

The main space, with its exposed structure, is decorated with modern and classic furniture. First, the Extrawall sofa by Piero Lissoni

The Extrawall sofa by Piero Lissoni, it is a modular sofa that allows to combine the pieces of different configurations according to needs and space

The table, also a piece designed by Piero Lissoni, is the P04 model. The chairs, the classic .05 by Maarten Van Severen, edited by Vitra.

The floor was made in iroko industrial parquet, with water varnish.

The kitchen is incorporated into the main space. It's from Bontempi. In the background, presiding over the room, a painting painted by José Trapaga, entitled "La trampa".

In the background are the bedrooms. On the right with a wall clad in pine wood, on the center with a sofa bed in a small multipurpose space, and on the left, the master bedroom.

The sofa bed is designed by Karup

The personal space, has a sofa bed. The decoration with the Algae of the Bouroullec brothers, wallpaper and a console acquired by wallapop. The painting, a work by Román Francés, in La Alberca.

The double room, with another work by Jose Trápaga "Pensamiento Acción".

A view of the bedrooms. the main bed is the Tokio model by Piero Lissoni.

The master bedroom combines classic furniture, such as the desk, a large tapestry, and the bed or dressing room edited by Porro.

Plan of the apartment