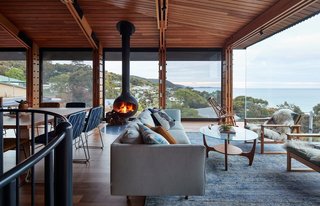 When Kate and Grant, the owners of Dorman House—an old shack near the beach in Lorne, Victoria, Australia—decided to renovate, they hoped to modernize the space while retaining its charming, shack-like character. And they also were seeking better views of the ocean.

They approached Australian design studio Austin Maynard Architects, who were more than happy to salvage Kate and Grant's shack—a traditional post-war-style residence along the Great Ocean Road that's quickly being replaced by what the studio’s founder Andrew Maynard calls "McMansions."

The transformation involved carefully crafting a timber box extension that was positioned on top of the existing beach shack—thus addressing the owners’ desire for elevated sea views. The kitchen, dining, and living area is housed in this elevated extension, which can be accessed via a spiral staircase from the original shack. A lightweight but sturdy polycarbonate cladding was used as infill for the older shack structure below in order to create a functional space that melds seamlessly with the new addition.

The interiors of the house are lined with Silvertop Ash for a cozy, cabin-like feel. On the northern side of the living area, full-height windows slide open to let in natural light and crisp sea breezes.

Much of Austin Maynard Architects’ projects are built sustainably, and Dorman House is no exception. A hood constructed above the northern window decreases the intensity of the sun’s heat in summer, but optimizes passive solar gain in winter. A large water tank was incorporated for flushing water into the garden, and recycled timber was used for the interiors.

In Lorne, Victoria, Austin Maynard Architects gave an old shack near the beach a modern revamp and a timber extension that allows for elevated sea views. With interiors lined in recycled Silvertop Ash, the house oozes a cozy, cabin-like feel.