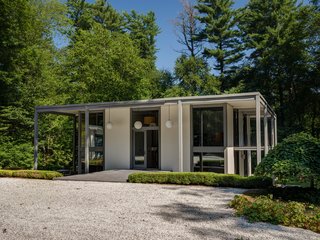 New Canaan contains one of the most significant - and arguably the world - collections of modernist residential architecture in America. DeSilver House is no exception.

"New Canaan, to its considerable surprise, has become an architect's battleground, and everyone talks houses."

John Black Lee + Harrison DeSilver designed the house to demonstrate that good design and construction could be built without compromise and that it could be done within a modest budget. They achieved both objectives by developing a six foot by six foot modular system. The exterior panels were prefabricated and consisted of a solid six foot wall panel and a six foot glass wall panel.

Passive shelter is provided to the ground level patios by the deep overhang on all four sides of the house. The roof of the house extends well beyond the footprint of the house and provides summer relief to the second- floor balconies and the floor-to-ceiling windows. The outer edge of the roof is supported on thin piers that anchor DeSilver House to the bucolic landscape.

Sponsored by the American Institute of Architects (AIA) in corporation with HOUSE & HOME and the American Home.

uploaded DeSilver House by John Black Lee + Harrison DeSilver | 1961 through Add A Home.
Add your own project for the chance to be featured in Editor’s Picks.

DeSilver House is a bi-level plan. The staircase was made by Unistruct Product Co in Chicago.