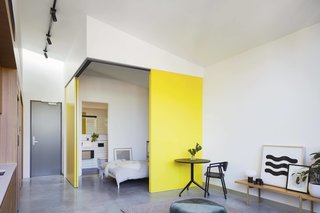 Located in the suburb of Richmond in Melbourne, Australia, Coppin Street Apartments consists of five one-bedroom units and one two-bedroom unit with a unified facade—all of which look and feel a lot bigger than their size might suggest.

Housed in a 1960s freestanding brick building, these walk-up apartments—often referred to as "six-packs"—were reinterpreted by Australian practice MUSK Architecture Studio, who transformed them into stylish modern dwellings where every square foot is put to good use.

The parking space, which is often found in such traditional six-pack buildings, was removed. This helped increase connectivity between the building and the street, as well as improve the internal configuration of the units.

An angled roof wraps the units to create a defined form, so from the outside, all the apartments look as if they're part of a single dwelling.

Apartment residents enter the building through a transitional forecourt, where they can also park their bicycles. This forecourt leads to a shared lobby area with illuminated storage cages that work with the exposed concrete floor to give the lobby a robust industrial look.

Soft lighting draws occupants through the lobby area and up a central light-filled staircase to their respective units.

Inside the apartments, the architects used flexible floor plans with large sliding doors to demarcate living and sleeping zones.

Mezzanines were incorporated to accommodate diverse programs and enhance the individuality of each unit.

According to MUSK’s lead architect Hannes McNamara, Coppin Street Apartments are an effective solution for integrating increased density into a prominently single dwelling street, while positively contributing to the existing streetscape and neighborhood.