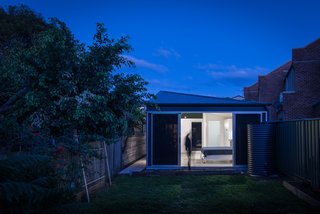 Cooks Hill is an inner-city suburb of Newcastle, that is experiencing renewal . This site is long and thin and has an area of 314.3m². It is currently occupied by a two storey terrace house fronting the street, there is an ‘L’ shaped right of way that adjoins the rear of the site, which connects the rear to the street. The site is flat, with approximately 400mm fall from rear of site to front of site

Legislation designed to encourage secondary homes within established areas ‘State Environmental Planning Policy Affordable Rental Housing 2009’ allows these buildings (often called ‘Granny Flats’) to be built on underutilized land. Our clients brief was for a self contained unit that incorporated storage for the main house, a rear entry and beach shower that could be shared by both the main house and the flat. The new space could be used as a teenager or parental retreat from the main house, or a self contained unit to be rented on a short or long term basis by others.

The design response to the site was to maximize the width of the built form, minimize it’s length so as not to take too much of the garden and use as much of the with of the 6.25m wide block as possible. An external passageway that doesn’t compromise privacy to the flat was created on the North side, which also allowed the side elevation of the neighbor’s dilapidated garage to be featured. A small court was created as an entry and lightwell for the flat, with the storeroom opening off the rear lane, maximizing the use of the available land.

The roof form opens up to the North and the court so as to present low edges to the house garden and neighboring properties, in order to minimize impact on the immediate context

Services are located on the South wall, with a bed that folds down at night time at the Western end. A daybed is built in along the North wall to provide storage as well as minimize the amount of loos furniture required. The building is well insulated, well ventilated, has high performance glazing, collects it’s own roof water for reuse and the thermal mass of the polished concrete floor slab enables temperature extremes to be moderated.

Shane Blue uploaded Cooks Hill Granny through Add A Home.
Add your own project for the chance to be featured in Editor’s Picks.

View from the main house

Kitchen and fold down bed