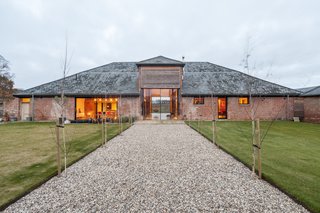 In a life-changing move, homeowners Hannah Smith and Jeremy Witt reside in a caravan in the rural landscape of Suffolk, England, to oversee the restoration of a crumbling barn complex.

Though the lofty space that Hannah Smith and Jeremy Witt call home is a converted barn, it’s not hard to imagine it as a cathedral when you’re inside, thanks to its grand proportions, soaring ceiling, and cruciform plan. Originally the farm of a nearby estate, which fell victim to a fire in the 1950s, the abandoned barn was transformed into a contemporary home by David Nossiter Architects, who had also renovated the clients’ townhouse in Colchester, Essex. Smith and Witt found the dilapidated complex on the Essex/Suffolk border after they decided to move to the countryside. At the time, it required faith to see the buildings’ potential. "It was a derelict barn full of pigeons," recalls Smith. "It was black and falling apart. The timbers were rotten. Everyone told us not to do it."

They say love is blind, and Smith and Witt were in love. They moved out of their townhouse and onto the site, living in a caravan as they managed the project. "Opening the door in the morning and being outside in the fresh air was a real buzz," says Smith. "We enjoyed the simplicity of not having so many things to worry about." Not that the undertaking didn’t pose its own challenges—a listed building in England, the barn had to meet several regulations. One of the thorniest problems was finding a way to refurbish and insulate the roof. Salvaging roofing slate and timber from the stable blocks and garage, both of which were beyond repair, Nossiter then devised a plan to install insulation over the roof above a new deck.

The new design keeps the open space of the barn largely undivided, making use of birch-faced plywood sheets as partitions for private areas. "We saved as many original features as possible," says Witt. For example, the lights are controlled by existing switch boxes, and the stalls of the old milking parlor have been repurposed as parking spaces for bikes and motorbikes. "With all of these modern boxes packed within the space of the barn, you’ve got a nice subdivision between the old and the new," says Witt.

With this thoughtful renewal, Smith and Witt have earned the trust of the locals as well. "The barn served the community," explains Witt, and Smith chimes in, "Everyone has fond memories of playing at the barn, everyone knows someone who worked at the barn. They were really supportive of our progress." A modern dwelling that honors the building’s historic past as well as its role in the surrounding village, Church Hill Barn is a refreshing take on rural living.

The clients worked with Nossiter to preserve as many historical features as possible. The barn's cruciform plan arose from the model farm movement championed by original owner John Gurdon Esquire, who brought different farming functions under one roof. Here, what was once the old milking parlor now serves as bike and scooter storage.

The renovation honors the grand, cathedral-like proportions of the original barn. In addition to the

The dining room looks out at the front courtyard. Working with the original openings, Nossiter set the doors back from the external wall line.

The kitchen is a minimalist, functional space with Miele and Wolf appliances, Lumi joinery, and concrete worktops and sinks designed by the homeowners.

The lights are operated by original switch boxes. Beside it, a barn door leads to the three bedrooms.

Simple plywood, cut out to allow views of the landscape, creates subdivisions within the home for private bedroom and bathroom spaces. Rather than formal rooms, they have the effect of large-scale furniture.

In a life-changing move, homeowners Hannah Smith and Jeremy Witt reside in a caravan in the rural landscape of Suffolk, England, to oversee the restoration of a crumbling barn complex. Simple plywood, cut out to allow views of the landscape, creates subdivisions within the home for private bedroom and bathroom spaces. Rather than formal rooms, they have the effect of large-scale furniture. The master bedroom features an ensuite tub.