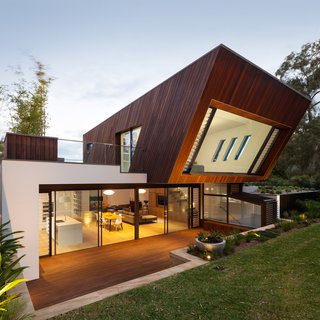 Sited within a conservation area in Sydney’s Lower North Shore, the project involves alterations and additions to an existing 1940’s dwelling located within a suburb master planned by the eminent architect Walter Burley Griffin.

The clients initial brief was to maintain the existing modest brick dwelling and create a new addition to the rear of the house which faces North onto an existing secluded garden.
The design approach was to provide a clear delineation between the old and new elements of the building. The main device used to create this separation was a large glazed skylight which bisects the building in its entirety segregating the existing single story, brick and terracotta roofed dwelling from the contemporary 2 story addition to the rear. Not only does the skylight provide a visual break but it also serves to bring daylight deep into the heart of the building.

The new addition was conceived as 2 interlocked, stacked blocks. The lower block clad in white render is orientated in an east west direction, matching the width of the existing dwelling. The upper block is a timber clad form which is visible from all sides including its expressed soffit which forms a ceiling in the living space below.

The form of the timber block is dynamic housing within it the master bedroom. The dynamic nature of this timber form is created by tilting the northern elevation at 30 degrees from the vertical. This angular geometry not only affords good solar protection to the north facing glazing, but also directs the occupants gaze from the master bedroom downwards to the garden below.

The living space at ground floor is generous, yet areas of intimacy are created by using a central fireplace which visually divides the space whilst also allowing space to flow in and around it.

Gerard Page uploaded Castlecrag House through Add A Home.
Add your own project for the chance to be featured in Editor’s Picks.